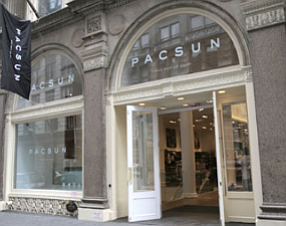 Investors sent shares of Anaheim-based Pacific Sunwear of California Inc. up on Wednesday, a day after the retailer reported continued improvement in its business.

The retailer operates a chain of 617 stores that sell clothing for men and women inspired by action sports, music and fashion.

Pacific Sunwear shares were up about 6% in afternoon trading Wednesday to a market value of $217.42 million.

The company reported an adjusted loss of $11.8 million for the fourth quarter ended Feb. 1.

Analysts had expected a loss of $13.19 million.

“We continue to be encouraged by our positive momentum within a challenging retail environment throughout the year, marked by eight straight quarters of positive comparable store sales, sustained gross margins and reduced operating costs, all contributing to a significant improvement in our operating performance compared to fiscal 2012,” Pacific Sunwear Chief Executive Gary Schoenfeld said in a statement.

The retailer said it expects an adjusted loss in the range of $8.3 million to $11.8 million for the current quarter. Analysts expect a loss of $8.3 million.

The company's net sales forecast for the current quarter of $169 million to $174 million beat the analyst estimate of $168.08 million.