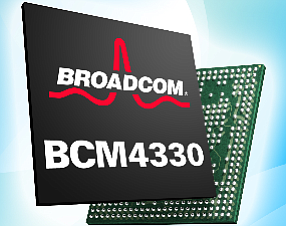 The company posted sales of $2.06 billion, down less than 1% from a year ago.

Analysts on average had forecast sales of $2.02 billion.

Wall Street had expected an adjusted profit of $323.7 million for the quarter.

The company posted record full-year revenue in all three of its business groups: broadband communications; mobile and wireless; and infrastructure and networking.

The company's shares were up about 1% in afternoon trading Friday to a market value of $16.83 billion.

The company enters 2014 with an eye towards penetrating the LTE market with its first set of offerings, as well strengthening its position in the ultra HD segment, data center infrastructure and the burgeoning ecosystem of connected home and work devices.

Broadcom provided guidance on revenue, gross margins, and research and development for the current quarter.

The company projected sales between $1.9 billion and $2 billion in the March quarter, just below analyst expectations of $2.02 billion.

Gross margins, a key measure for technology companies, are projected to be in the range of 51.6% to 52.1% in the current quarter, down from 52.6% in the December quarter.

Spending on research and development is projected between $717 million and $737 million, up from $702 million in the recently ended quarter.

Broadcom on Thursday also announced that its board approved a 9% increase to its quarterly dividend to 12 cents a share.