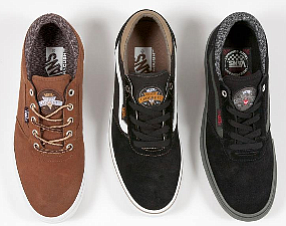 Cypress-based skate shoe and apparel company Vans Inc.'s performance was called out on Friday as one of two milestones marking 2013 for its parent.

The local company's revenue rose 17% to more than $1.7 billion for the 12 months through Dec. 28, and it became the second largest brand for parent VF Corp. of Greensboro, N.C.

The recap on Friday included full-year and fourth-quarter results for VF.

The company doesn’t usually break out revenue performance for its brands.

VF’s Outdoor & Action Sports division, which includes Vans and The North Face, had revenue for the quarter of $1.9 billion, up 12%.

VF said it expects Vans to have revenue percentage growth in the mid-teens this year.

The results missed analyst projects, and investors sent the company's shares down about 6% in afternoon trading Friday to a market value of $24.76 billion.