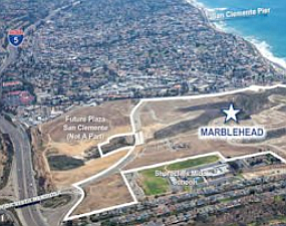 The Scottsdale, Ariz.-based homebuilder said it has formed a venture with its two largest shareholders, Oaktree Capital Management LP and TPG, to acquire and develop the 195.5-acre Marblehead site.

The property, which was put up for sale late last year by the Irvine office of Land Advisors Organization, is one of the last major coastal sites in Southern California entitled for residential development.

Terms of the purchase were not immediately disclosed; reports put the deal at about $205 million.

Taylor Morrison was rumored as the most likely buyer of the site for a few months, but a delay in the sale’s closing had many industry watchers speculating that the company was getting cold feet over the deal’s price.

Prior estimates for the land sale were in the $215 million range.

Lehman took control of the San Clemente property and several other residential sites in California in 2012 after a protracted legal struggle with its one-time development partner, SunCal Cos. in Irvine.

Home construction in the community is expected to begin in 2015, according to Taylor Morrison.