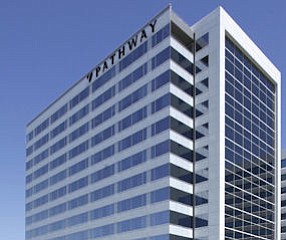 Kilroy Realty Corp. has put offices it owns in Orange and the Irvine Spectrum up for sale, the latest sign of retrenchment in the Orange County commercial real estate market for the Los Angeles-based real estate investment trust.

Kilroy, among the largest owners of high-end offices on the West Coast, recently listed for sale the 999 West Town & Country office in Orange, along with 111 Pacifica in Irvine.

The two buildings, which combine for about 166,000 square feet, could sell for close to $40 million. Brokers with the local office of Jones Lang LaSalle have the listing for the properties.

The buildings are about 92% leased and bring in nearly $2.5 million in rents annually, according to marketing material for the offices.

It has owned the smaller, 67,500-square-foot Spectrum-area office since 1997, paying just under $10 million for the multitenant property.

The planned sales represent another step back in the local market for Kilroy, whose OC portfolio is soon expected to be a one-building affair.

The company, which had a recent market value of about $4.3 billion, plans to sell all of its area properties―except the 2211 Michelson office in Irvine―in the upcoming months.

A year ago, the company owned more than 4.4 million square feet of office and industrial buildings in OC. It sold its industrial portfolio—which included properties throughout OC—at the end of 2012 in a $500 million deal.

Office sales are now the company’s focus in OC. Kilroy owned four offices totaling about 500,000 square feet in OC at the end of 2012.

The company’s entire office portfolio is about 13.5 million square feet and is based in California and Washington.

Besides 2211 Michelson and the just-listed properties, the other local building the company owns is a nearly 60,000-square-foot office in the Kaiser Business Center just off the Riverside (91) Freeway in Anaheim.

That Anaheim building isn’t listed as being for sale, but company officials implied during its last conference call that it had a letter of intent for the building.

Chairman and Chief Executive John Kilroy Jr. said he sees OC as a nonstrategic market for the company, despite the company’s significant holdings in Los Angeles and San Diego counties.

That’s because of the dominance of Newport Beach-based Irvine Company in its holdings of high-end buildings in OC, Kilroy said during the company’s last analyst call.

“You have to be careful that you have exactly the right product, and you have to be a [market] timer because of that big beast called the Irvine Company,” Kilroy said.

2211 Michelson, a 6-year-old building a few blocks from John Wayne Airport, still fits the bill as being a good fit for the company, officials said.

“We’re not in the market on the Michelson building,” Kilroy said.

The REIT refinanced its debt for 2211 Michelson last summer. The $97 million loan also is tied to a smaller Santa Monica office that Kilroy owns.

“We think that [2211 Michelson] continues to hold plenty of solid value, and if and when we need to or want to pull the trigger for some reason on that, we expect [the value] to be there,” Khouri said.

Officials said they weren’t concerned about operational issues arising from having only one OC building to manage. They also held out the potential for future acquisitions here if the opportunity arises.

“I don’t see us being big acquirers [in OC],” Kilroy said. “We will be opportunistic if there’s a great buy [available], but I don’t see any great buys right now.”