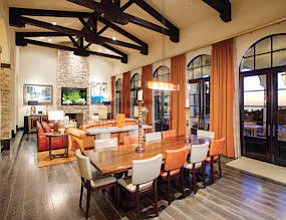 Buyers continue to drive the luxury home market to heights unseen in half a decade, and ocean-view homesite sales are also on the rise.

In the past two months, eight undeveloped parcels, all with views that stretch to Catalina, have sold for $2 million or more each.

What’s driving the increase in the purchases?

Buyers covet the opportunity to build their own custom homes, as evidenced by the Strand at Headlands in Dana Point, which is comprised of some of the last undeveloped oceanfront lots in Orange County.

Realtors say buyers want homes that are “green,” free of materials that may contribute to health problems, and with fully integrated technology throughout.

The home at 34 Ritz Cove Drive has yet to be built, but the plans promise a residence that will have a gourmet kitchen, family room, custom-patterned carpet, a salt-water pool and spa, and more.

The future 5,300-square-foot home will have five bedrooms and five baths.

Bob Wolff of Harcourts Prime Properties represented both sides of the sale.

The home at 1 Current in Newport Coast evokes a feeling of warmth with its designer colors and wood and stone touches throughout.

It’s on a private lot at the end of a cul-de-sac, has views of the ocean and Catalina Island, and sits on nearly a half-acre.

Outdoors, there are multiple areas for entertaining. There is also an outdoor kitchen, fire pit, and pool and spa.

The Italian Villa-style house has four bedrooms and four baths.

The five-bedroom, seven-bath home sits on more than a quarter of an acre on the ocean side of Pacific Coast Highway.

The Irvine Cove home was built in 2012 by Newport Beach-based JWJ Homes.

Tim De Cinces of HÔM Sotheby’s International Realty represented the seller, and John Stanaland of HÔM worked with the buyer.

The property at 2612 Ocean Blvd., on a beachfront street in Corona del Mar, is two homes in one—a top-over-bottom duplex.

The block has no homes across the street, so the views of the ocean, China Cove, Newport Harbor, the Wedge and jetty are unobstructed.