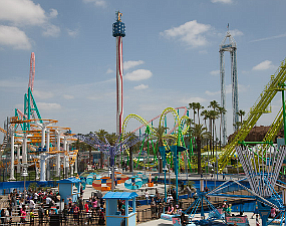 For the quarter ended Sept. 28, Walt Disney Co. said revenue for its Parks and Resorts division rose 8% from a year earlier to about $3.7 billion. It does not break out the earnings or attendance for individual parks.

Income for the division in the September quarter grew 15% to $571 million.

Increased guest spending at the Disneyland Resort, along with higher attendance at the Walt Disney World Resort in Florida, helped the gains.

The September quarter capped off a record year for the company's revenue and net income.

Sandusky, Ohio-based Cedar Fair Entertainment Co.'s net revenue increased 7% from a year ago to $592.1 million. The company attributed the growth to increased guest spending and attendance.

The company said its parks business is set to see its fourth straight record year, with net revenue through Nov. 3 up 6% and comparable park attendance up 2% from the year-ago period.

Cedar Fair said it now expects to reach its goal of adjusted earnings before interest, taxes, depreciation and amortization of $450 million earlier than its original 2016 target.