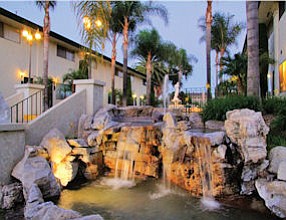 Il Pompeii, an apartment complex in La Habra, has changed hands for $19 million.

“Il Pompeii Apartments is atypical of many properties within its vintage,” said Stewart Weston, senior director for the Irvine office of Institutional Property Advisors, the multifamily brokerage division of Marcus & Millichap Real Estate Investment Services that represented the seller in the transaction. “The seller and original developer incorpor-

ated a number of forward-thinking key amenities and construction features into the original plan.”

Those amenities include barbecue and picnic areas, central air conditioning and heating, a community room and several other features.

The name of the property’s buyer, described by brokers as a “local capital buyer,” wasn’t disclosed. Property records show the new owner having ties to Tarzana-based JB Partners Group Inc.

JB Partners is an apartment investor that owns about 50 properties in California; recent acquisitions the company has been involved in include a Tustin apartment complex that was sold to it for $25.5 million in late 2011.

The seller was an affiliate of La Habra-based Villelli Enterprises Inc., according to property records.

Weston represented the seller in the deal, along with IPA colleague W. Michael Cavner and Marcus & Millichap’s John Nguyen.

Irvine-based Bixby Land Co. has leased a recently renovated 165,000-square-foot office campus it owns in San Jose to data storage company Nimble Storage. The lease is one of the larger office deals the Silicon Valley office market has seen this year.

Bixby bought the 30-year-old property in mid-2011 for a reported $19.5 million and spent an estimated $5 million renovating it.

Nimble Storage’s lease is said to be worth more than $31 million.

The company plans to move its U.S. headquarters to the property from a nearby location. It also has offices in Australia, Germany and the U.K.

An affiliate of Newport Beach-based KBS Realty Advisors is paying $44.9 million for an apartment complex in Frederick, Md.

about an hour northwest of Washington, D.C.

The property was sold by a unit of Chevy Chase, Md.-based Federal Capital Partners, which bought the complex in 2009 for $28 million.

The KBS-Legacy Partners nontraded REIT had raised about $127 million from investors as of the end of 2012.

An apartment-investment fund run by Addison, Texas-based Behringer Harvard Holdings LLC said it’s moving ahead with an investment for a planned apartment complex, across the street from The Triangle shopping center in Costa Mesa.

The company said last month that its Behringer Harvard Multifamily REIT I Inc. would be providing equity capital for the construction of Pacific Gateway, a 113-unit complex at Harbor Boulevard and Bernard Street near the end of the Costa Mesa (55) Freeway.

Fairfield Residential Co. of San Diego is handling the development of the midrise project, located on land where a for-sale condo project was once planned.

A financing deal had been expected.

Behringer Harvard had an option to convert the land loan to an equity investment, which makes it responsible for funding all of the project’s development costs, according to regulatory filings.

Construction is starting to move ahead at the site now, and the project is expected to be completed in the fourth quarter of 2014.