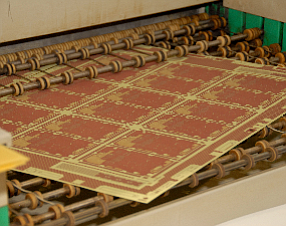 Orange County’s largest printed circuit board makers reported earnings for the March quarter after the close of trading Thursday.

Its shares were up nearly 17% in afternoon trading Friday to a market value of $680.07 million.

Analysts on average had forecast sales of 320.4 million.

Adjusted profits came in at $10.7 million, down 43% from a year ago and above Wall Street expectations of $8.1 million.

TTM projects sales in the current quarter to be in the range of $320 million to $340 million, on the low end of analyst estimates of $340 million.

The company said adjusted profits would be between $6.55 million and $11.4 million, the latter figure at Wall Street expectations.

The Business Journal reported last month that TTM will cut its production capacity in China under a deal to swap production plants with another manufacturer.

Shares of Multi-Fineline Electronix Inc. were down about 1.5% to a market value of $365.01 million.

The Anaheim-based company reported revenue of $173.7 million in the March quarter, down 16% from a year ago and below Wall Street expectations.

Analysts on average had forecast sales of $188 million.

The company attributed the sales drop to less demand from key customers.

The company provided a sales target in the current quarter between $155 million and $185 million, below Wall Street expectations.

M-Flex continues to reduce inventory and production while it seeks a more diverse customer base, according to Chief Executive Reza Meshgin.

In the March quarter “newer customers comprised approximately 8% of sales and we expect this contribution to double” in the current quarter, he said.

TTM and M-Flex are both known suppliers to Apple Inc. and often track the Cupertino-based consumer electronics maker’s moves on the Nasdaq.

Apple's shares were up about 1% on Friday to a market value of $423.38 billion, after a better-than-expected April jobs report.