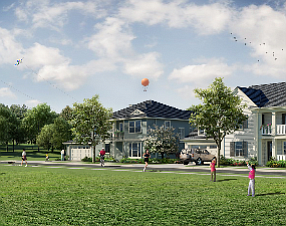 Newport Beach’s William Lyon Homes is among a group of eight builders selected to build the first 726 homes at Irvine’s Great Park Neighborhoods, which is set to open for sales by the end of September.

The builders, a mix of public and privately-held companies, closed on sales for the land this week, according to Emile Haddad, chief executive of FivePoint Communities Management Inc., the Aliso Viejo-based development manager of the Great Park Neighborhoods project.

Construction of the first model homes at Pavilion Park – the name given to the first part of the 3,700-acre housing and commercial development – should begin later this month.

The first home buyers at the project could move in by the end of the year.

“There’s been a lot of speculation (about the fate of the development). Today, that question gets answered,” Haddad said.

The strong reception for the Irvine land by homebuilders – 21 firms vied for portions of the 726-home project – has prompted FivePoint to begin early-stage development work on a second neighborhood nearby, which could hold between 500 and 1,000 homes, according to Haddad.

For more details, see the May 6 edition of the Business Journal.