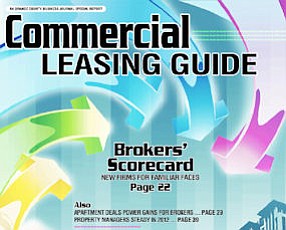 There’s been a flurry of changes among area brokerages and their staff since the peak of the last real estate market, when the top commercial brokerages here worked on close to $20 billion worth of sales and leases annually.

A number of long-standing names in the area—such as Grubb & Ellis Co., Trammel Crow Co., O’Donnell/Atkins and Staubach Co. either shut their doors or got absorbed into other companies through mergers or acquisitions.

About a third of the brokerage offices listed in the Business Journal’s ranking of 2005 top brokerages aren’t on this week’s list, and nearly two-thirds of the top local officials listed there are no longer in charge of the same companies.

“Since 2005, there have been a lot of consolidation, mergers and companies going out of business,” said Barry Saywitz, president of Newport Beach-based tenant representation firm Saywitz Co.—one of the few companies and executives that have avoided the flux.

“I’m not sure if that makes me one of the smart ones or the dumb ones,” joked Saywitz, who said he looked at a potential sale of his company in 2006 and 2007 near the top of the last real estate cycle. But he said he doesn’t expect a deal for his company now, given the uncertainties of the current market.

More consolidation among brokerages may come in OC, according to Jeff Ingham, senior managing director for the Irvine office of Chicago-based brokerage Jones Lang LaSalle, which has been involved in a few of those deals.

Jones Lang LaSalle paid an undisclosed amount last year to buy Irvine-based 360 Commercial Partners, a boutique brokerage that specializes in area industrial and office sales and leases. The deal filled a gap in JLL’s line of OC offerings while giving 360 Commercial access to a company with national presence.

Consolidation “has been the trend for the last five to 10 years, and I don’t think it’s going to subside,” Ingham said.

That trend has led to a steady shuffling of brokers among the area’s remaining offices, which have been adding staff since the worst of the last downturn, with several companies using the market flux to create a larger presence in OC.

There are 707 brokers currently at the 21 largest local brokerages, and employment levels for those who help lease and sell commercial buildings and land are now approaching levels seen in 2006. That’s when 727 brokers worked for the top 25 brokerages, according to Business Journal data.

Employment among the area’s top brokerages has increased about 15% over the past three years.

Those figures don’t include a few recently started brokerages that will be adding staff over the next few years, such as New York-based Coldwell Banker Commercial Alliance, which began operations last summer. It announced the opening of an Irvine office early in January and said it plans to hire 18 to 22 brokers there over the next two years, according to Michael Dorsey, who heads up the local office.

While some of the changes among brokerages resulted directly from the downturn, such as last year’s bankruptcy of then Santa Ana-based Grubb & Ellis, others happened as national companies moved to create bigger presences in OC and other top markets.

The brokerage industry is beginning to separate into two types of businesses, with a group of larger national players pushing to offer a wide variety of services on one end and smaller, more local brokerages with deep ties to a region or marketplace on the other, said Jeff Moore, senior managing director for CBRE Group Inc.’s OC operations.

“You can’t survive in the middle (of those two groups),” Moore said.

“Competition is gearing up meaningfully, and not everyone is going to survive,” said Carnahan, who cited Canada-based Avison Young, Cassidy Turley in Washington, D.C., and Los Angeles-based DTZ as larger companies looking to grow their OC operations.

Orion Property started in 2001 and last year had its best year ever, working on some of the area’s largest office leases and sales (see story, page 31).

Carnahan said he and his partners would “never say never” to a potential sale to a larger company looking to add an experienced OC team to its operations but that it would have to be the right opportunity, similar in nature to what happened last year between 360 Commercial and Jones Lang LaSalle.

“We would consider joining a national or regional player if their business provides us the jet fuel (to grow),” Carnahan said.