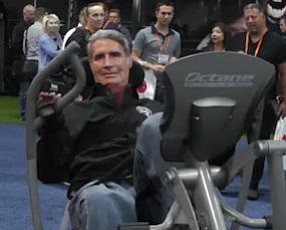 Nieto was accompanied by his wife, Lynne, to the IHRSA’s annual event, which is known as “the Super Bowl of trade shows” for the health and fitness-club industry.

Nieto founded and served as chief executive of exercise bicycle maker Life Fitness, eventually selling his stake to Lake Forest, Ill.-based Brunswick Corp. as part of a $310 million deal in 1997.

He was diagnosed with ALS almost eight years ago and is now confined to a wheelchair.

Nieto and his family have been supporting the Cambridge, Mass.-based ALS Therapy Development Institute among other efforts they’ve undertaken to battle ALS under the banner of Augie’s Quest, a nonprofit foundation that is part of the Muscular Dystrophy Association and has raised more than $35 million.

Nieto serves as chair of both organizations.