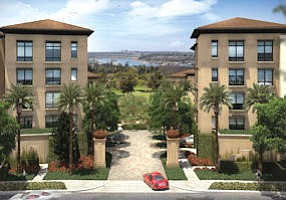 Under development: Meridian condos in Newport Beach to have view of golf course, ocean

A good portion of the proceeds from Aliso Viejo-based The New Home Co.’s recently proposed initial public offering could be used to fund one of the pricier land buys seen in Irvine in several years.

The privately held company, formed in 2009, filed a registration statement on June 14 to raise as much a $172.5 million in an IPO—making it the fourth Orange County-based builder to either go public or explore going public this year.

A time frame for the builder’s IPO has not been disclosed. The company plans to list its shares on the New York Stock Exchange under the ticker “NWHM.” The deal’s lead underwriters are Citigroup and J.P. Morgan.

The company—whose executive team includes veterans from Irvine Company and defunct builder John Laing Homes—has made waves in Orange County with several high-profile projects since its inception, including Irvine’s Lambert Ranch development and Meridian, a high-end condominium project under way in Newport Center.

A focus on land sites in OC looks set to continue, based on a reading of the company’s registration statement with the Securities and Exchange Commission.

Net proceeds from the IPO will be used “primarily for the acquisition of land,” as well as for development of lots, home construction, and other related purposes, according to the registration statement.

Among the potential land buys for the company, according to SEC filings, are a pair of sites in Irvine that would total 108 lots and sell for a combined $118.2 million.

The average of nearly $1.1 million per home lot is among the priciest noncoastal land deals seen in OC in recent memory.

New Home Co.’s registration statement said the company entered into a letter of intent for the two Irvine developments at some point after April 1, and the SEC filing noted that the proposed deals have yet to close.

Specifics on the land’s location in Irvine were not disclosed.

Company officials last week declined to comment on the potential land purchases, citing quiet-period restrictions prior to the company’s IPO.

Real estate sources unaffiliated with the company believe the most likely location of those two land deals are the Irvine Co.’s Orchard Hills development.

New Home Co. has been rumored for several months to be a potential builder at Orchard Hills, a high-end home community in North Irvine that’s seeing infrastructure work ramp up this year.

Executives at Newport Beach-based Irvine Co. declined to comment on New Home Co.’s potential involvement in the project. They said they weren’t planning to announce builders for Orchard Hills for a few months, and that the company is currently focusing its efforts on its recently opened Cypress Village community.

Outside of Orchard Hills, the most expensive housing development on the books in Irvine is believed to be a 150-home project south of Laguna Altura called Hidden Canyon.

That Irvine Co.-overseen project is believed to be several years away from moving ahead, and real estate sources point to Horsham, Pa.-based Toll Brothers as the most likely buyer of land there.

New Home Co. also has its eye on other OC projects outside Irvine.

The company last month teamed up with an affiliate of Los Angeles-based Resmark Cos. to buy an 18-acre site in San Juan Capistrano where it plans to build 33 homes.

Specifics of that project’s location also were not disclosed in the registration statement, but sources point to Belladonna Estates, a proposed custom-home development in the city that’s been tied up in litigation for several years, as the most likely site.

New Home Co. said it has a 20% capital interest in the San Juan Capistrano project and has invested $2.3 million in the venture.

The company is also building a pair of homes for a third party at The Strand, a high-end coastal project in Dana Point.

Those two homes are expected to be finished next year and should cost more than $5 million each.

Including joint ventures, New Home Co. had 1,120 lots under development in 22 communities across California, as of March 31. It also was operating five Southern California communities, totaling an additional 189 lots, under fee-building arrangements.

Webb, Stelmar and Redwitz were with John Laing Homes and helped orchestrate that company’s peak-market sale to Dubai-based Emaar in 2006 for $1.05 billion. Davis served for 11 years as president of Irvine Co.’s community development division.

The company’s four founders made an initial $10 million capital commitment in the builder, which has since gotten investments from Toronto-based asset manager Tricon Capital Group Inc., IHP Capital Partners in Irvine and Santa Monica-based Watt Cos.

Irvine-based TRI Pointe Homes Inc., which like New Home Co. was created in 2009, raised about $233 million in its January IPO. It was the first builder in the U.S. to go public in more than eight years.

William Lyon Homes soon followed, with the Newport Beach-based company raising $217.5 million in a May offering. The longtime area builder had been privately held since 2006.

Also going public this year is Scottsdale, Ariz.-based Taylor Morrison Home Corp., whose Southern California operations are based in Irvine. The company raised $526 million in its April IPO.