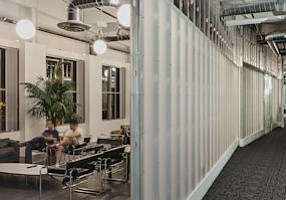 You wouldn’t mistake the outside of Ready at Dawn Studios LLC’s Irvine headquarters for the 2.8-million-square-foot mother ship office planned for Apple Inc. in the Silicon Valley, but the inside of the gaming company’s offices at Discovery Business Center has a look that could hold its own in Cupertino.

The space’s gray, monochromatic color scheme also echoes the fog-shrouded hues seen in early artwork for the company’s upcoming video game, “The Order: 1886,” which is being released this year for PlayStation 4.

Add to that a bevy of amenities, including a movie theater where employees can relax on their breaks and a break room with space for impromptu video game contests, and Ready at Dawn’s headquarters looks as much bar-and-game venue as office.

The Newport Beach office of San Francisco-based architecture firm Gensler, known for its creative-office designs, planned the gaming company’s open space with plenty of input from executives and staff.

Ready at Dawn had leased traditional-style offices while establishing itself and patiently holding out for the right spot.

“We’ve been around for nearly 10 years and were waiting for the opportunity to build our own space,” said Ru Weerasuriya, Ready at Dawn cofounder.

The office opened in December and has had an immediate impact on the company, said Weerasuriya, formerly a senior artist at Irvine-based Blizzard Entertainment Inc.

“The (office) dynamics have changed,” he said, explaining that there’s more collaboration among employees and a new excitement in the air.

The company’s getting buzz in gaming circles about the upcoming launch of “The Order: 1886,” which it announced about a month ago. But its new office also is drawing plaudits.

“We don’t really advertise the space,” Weerasuriya said. “But people who come here are impressed, especially those who’ve worked for other gaming companies.”

The company employs about 90 people and is currently looking to fill an additional 25 positions.

Gaming companies are known for their long working hours, and some of the amenities at Ready at Dawn’s space take those demands into account.

One section of the office includes lounge chairs—an employee’s idea—as well as an area set aside for relaxation and reflection.

“It’s fun and stressful,” Weerasuriya said of the industry.

The campus, about a mile from the Irvine Spectrum shopping center, is increasingly being marketed toward large and small companies looking for more progressive workspaces.

The property—in addition to the flexible, open offices seen at Ready at Dawn—offers ample outdoor meeting space and gathering places that provide opportunity to interact with numerous other tenants, said Newport Beach-based Irvine Company, owner of the Discovery Business Center.

The offices are a “premier employee base for recruiting and collaboration,” according to center marketing materials.

And area tenants like Ready at Dawn are increasingly looking to use their offices as extensions of their corporate brands and cultures, putting their unique stamps on their digs, said Steve Case, executive vice president of Irvine Co.’s office division.

Case said Irvine Co. has taken lessons learned from Silicon Valley in the design of some of its Irvine offices into more creative-style spaces.

“One of the most fascinating things we found is that the companies that are creating technology, like Apple and Google, are spending the most on their workplaces,” Case said. “They want (offices) that will make their employees want to come to work.”

Irvine Co. reportedly leases several buildings in Silicon Valley to Apple, in addition to having other notable technology tenants.

“We’ve spent a lot of time with these companies,” Case said. “They’re ahead of the curve.”

The buildings, whose tenants have an average of 10 to 20 employees each, are now fully leased at above-market rents, Case said.

Creative-office space can offer sizable bottom-line benefits for landlords like Irvine Co. It can command a rent premium of between 18% and 25%, all things being equal, according to brokers with the Irvine office of Jones Lang LaSalle.

In some configurations, in addition to their higher-end finishes, the offices can accommodate many more employees per square foot, resulting in the higher rents.

Not all companies are good fits for the creative space, though. Mortgage, insurance and other businesses with large back-office staff, or any business looking to keep rental expenses at a minimum, are unlikely users of the offices.

Irvine Co. is looking to do similar conversions at other properties, and its marketing materials indicate there’s also the opportunity to build upward of 900,000 additional square feet at Discovery Business Center.

There’s been little talk of ground-up development of creative-office space in Orange County in the next year or two, with the exception of a new building proposed for the Summit Office Campus in Aliso Viejo.

Most area projects to date have been redevelopments of existing properties.

Depending on the amount of traction that the creative-space push gets in OC, it could impact how much new office development moves ahead in the next few years.

Prospective tenants could continue to look at reworked space at existing properties, such as Discovery Business Center, rather than at new projects, according to real estate sources.