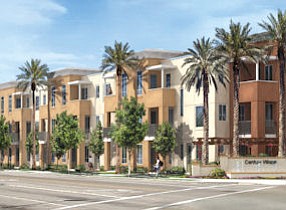 Century Village: 53-unit townhome project by Brandywine Homes in Garden Grove is sold out as construction wraps up

The Irvine Ranch continued to be the primary source of sales in Orange County’s slowly improving new-home market last year.

The county’s 26 largest homebuilders sold 1,822 new single-family homes and condos in 2012, a nearly 3% increase from a year earlier, according to this week’s Business Journal list.

Single-family homes sales—which made up about 68% of all the new home sales here in 2012—saw their second straight year of increases. Stand-alone home sales, which totaled 1,240, were up more than 4% from a year ago.

Lower-priced condo and townhouse sales, which had made up a majority of the region’s new sales every year between 2006 and 2010, saw their second-straight year of declines.

Data for this year’s list was provided by the Costa Mesa offices of Washington, D.C.-based real estate research firm Hanley Wood LLC, and was augmented by data from individual builders and the Business Journal.

The 3% uptick in sales still left the local industry with its fifth-consecutive year with sales of less than 2,000 new homes. That’s less than half the new home sales that OC saw a decade ago amid the last big home construction surge.

Those totals aren’t likely to be topped any time soon, but besting the 2,000-home sale mark appears more than attainable in 2013.

Meanwhile, developments at the Irvine Ranch continue to dominate the local sales market.

The Irvine Ranch saw an increase of 670 home sales last year, a nearly 88% increase from 2011 levels.

That was the largest year-over-year bump in total sales of any masterplanned project in the country last year, according to the John Burns report.

The Irvine area “continues to be a desired location by buyers in Orange County and abroad,” thanks to good schools, a strong job base, and numerous amenities, according to John Burns Consulting’s Nicole Murray.

Irvine Pacific saw 439 total sales—a 52% year-over-year increase—in 2012, keeping it in the No. 1 spot on the Business Journal’s list for the second-straight year.

Irvine Pacific was one of 11 builders on this week’s list that posted yearly increases in sales. Nine builders marked decreases, and six were new entries to the list.

Other builders with notable jumps in sales included Aliso Viejo-based New Home Co., which took the No. 6 spot in the list with 94 local sales, primarily at its Lambert Ranch development along Portola Avenue in Irvine.

The 50-acre project, one of OC’s highest-end developments in years, has brought in close to $100 million in sales since its opening last year.

Builders’ sales in this week’s list are ranked by homes closed, not just those under contract. New Home Co. likely would have placed a few spots higher in the list if homes under contract had been included.

Projects in Garden Grove, Brea and Huntington Beach helped place a few builders in the top 10 of this week’s list.

Irvine-based Brandywine Homes took the No. 9 spot in the list with 68 sales, many of them from its Century Village townhome project in Garden Grove.

The 53-unit development is effectively sold out now, despite construction that is still ongoing, officials said earlier this month.

The three-story townhomes at Century Village sold at a rate of about four homes per month, which is “a little faster than average—more like prerecession levels,” said Brandywine Vice President Dave Barisic.

Sales at Huntington Beach’s Pacific Shores project, located a few blocks from the ocean, helped vault Newport Beach-based Christopher Homes to the No. 8 spot in the list.

Shea kept the No. 2 spot on this year’s list with 176 sales, a slight increase from year-ago levels.

Standard Pacific took the No. 4 spot in the list with 101 sales in OC last year. Along with Brea, it is currently selling homes in Irvine and Buena Park.