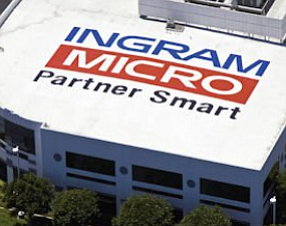 The company posted record revenue of $11.38 billion, up 14% from a year earlier.

Analysts on average had forecast sales of $10.84 billion.

The company in the December quarter posted sales gains in three of its four operating regions.

Sales in North America were up 6% to $4.21 billion, led by double digit growth in the small and medium-sized business segment and higher margin specialty divisions.

The Latin America region topped $602.7 million, up 5% and a record for the quarter.

Asia Pacific saw sales increase by 11% to $2.18 billion, led by double-digit growth in India and China.

The strong quarter was buoyed by last year’s acquisitions of BrightPoint Inc. and Aptec Holdings Ltd., which contributed about $1 billion and $75 million, respectively, to quarterly sales.

“We are clearly executing better against our key strategic initiatives and we are beginning to see early returns from our organic investments into areas such as enterprise computing and IM Logistics, as well as from our acquisitions to drive growth in higher value markets,” said Chief Executive Alain Monié.

The company provided some financial guidance for the current year.

The $840 million cash buy of Indianapolis-based wholesale distributor BrightPoint is projected to save the company at least $55 million annually in trimming redundancies, while contributing $27 million in adjusted profits this year and $52.55 million in 2014, excluding one-time charges and integration costs.

Ingram Micro projects revenue growth in the low teens this year, and a seasonal decline in sales and gross margins in the current quarter.

Its shares were down less than 1% at the close of trading Wednesday to a market value of $2.77 billion.