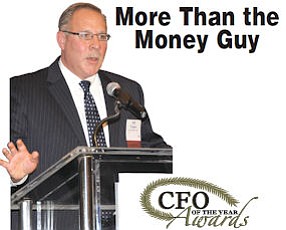 Perhaps no one knows the inner workings of Ingram Micro Inc. better than William Humes, who has been the chief financial officer of the Santa Ana-based company since 2004.

He’s taken on the COO’s duties in stride.

“It was a natural fit in the sense of expanding my involvement in things I was already intricately involved in,” Humes said.

The chief information officer reports directly to him, as do the executives in charge of warehouse operations and the company’s strategic sourcing group, which handles relationships with thousands of suppliers.

His finance team, meanwhile, counts some 1,500 staffers in the company’s four operating regions: the Americas, Europe, Asia-Pacific and Latin America.

It is the biggest distributor of computers, software, and other technology products in the world. Ingram is also the largest company in Orange County by revenue, with $36.3 billion in annual sales.

The company operates under razor-thin margins, typically netting less than a penny on the dollar. It has a market value of about $2.76 billion.

The size and nature of Ingram’s operations bring a different set of challenges for the finance chief.

It’s common for capital requirements to swing by $1 billion or more from quarter to quarter.

Humes was honored in the Lifetime Achievement category at the annual CFO of the Year Awards presented on Jan. 29 by the Business Journal and the California Society of Certified Public Accountants.

Humes was at PricewaterhouseCoopers LLP for nine years, where he reached the upper rungs of senior management.

His tenure at Ingram Micro began in 1998 as senior director for worldwide financial planning, reporting and accounting. He has also served as controller for various business units within the company and did a stint in the job at the corporate level.

Since then, he said, his two biggest achievements as CFO were closing Ingram’s largest acquisitions to date.

The first of the deals came in 2004, when Ingram Micro acquired Australia-based Tech Pacific Ltd. for $530 million. Tech Pacific was floundering at the time, racking up losses on operations spread over Australia and Asia.

Humes kept an eye on the purchase price to guard against gaps between Australian and U.S. dollars, he said.

“I was very involved in negotiations on that deal and subsequent leadership and integration,” he said.

Tech Pacific became a pillar of Ingram Micro’s Asia-Pacific region, which now generates more than $5 billion in annual sales and is the company’s fastest-growing market.

The biggest buy in Ingram’s history came in October, when it paid $840 million for BrightPoint Inc., an Indianapolis-based wholesale distributor that brought high-growth, high-margin business lines of products and services for the mobility segment, which includes smart phones, accessories, tablets, laptops and activation services, among others.

Humes led a favorably priced 10-year $300 million bond to help finance the deal, which added more than 25,000 customers and 100,000 distribution points for Ingram Micro across the globe.

Humes worked closely with Ingram Chief Executive Alain Monié in identifying BrightPoint as a prime acquisition target and building the financial model behind the deal, which included mapping out anticipated cost savings and revenue.

“We have a great working relationship,” he said. “We can bounce things off each other fairly well.”