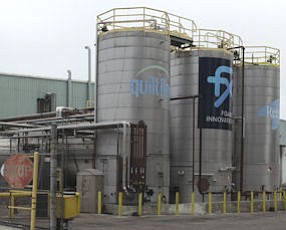 Irvine-based Sares-Regis Group, one of the most active industrial developers in Southern California over the past year, has bought a 25-acre property in the city of Orange that real estate watchers believe could eventually see more industrial construction.

The privately held real estate investor and developer recently closed on the purchase of land and property at 2060 N. Batavia St. The site is in a largely industrial part of Orange, a little more than a mile northeast of Angel Stadium of Anaheim.

The property includes a nearly 228,000-square-foot industrial building that records show being close to 50 years old.

The building at 2060 N. Batavia is fully leased to Media, Pa.-based foam manufacturer FXI, which previously operated under the Foamex International Inc. name.

Property records show the property being sold by an entity listed as Pegasus Properties, whose ownership includes former executives of Foamex, which was taken private in 2009 following a stint in bankruptcy.

Several real estate sources familiar with the property expect Sares-Regis to redevelop the site once FXI departs, although timing for that move is unclear. It is believed that the foam manufacturer has a lease for the building that runs into early next year, which could be extended.

The 25-acre site appears large enough to support development of one high-end industrial building in the 500,000-square-foot range, or several smaller buildings that could total closer to 400,000 square feet.

A development of that size range would be among the largest industrial projects to break ground in Orange County in several years.

The only development larger than 500,000 square feet currently on the books is Sacramento-based Panattoni Development Co.’s Anaheim Concourse project, which should see nearly 1.6 million square feet of high-end buildings break ground this year.

No plans for new construction at the Batavia Avenue property have been announced to date by Sares-Regis, and there appears to be no redevelopment plans filed with the city of Orange.

Sares-Regis executives noted last week that Foamex still has a lease for the site.

New construction at the site would be in keeping with Sares-Regis’ aggressive push in industrial development—much of it just outside OC—of late.

The company has close to $400 million of industrial development now under way, according to Peter Rooney, Sares-Regis president for commercial investments.

The company is moving ahead with development of land at Douglas Park in Long Beach, near the city’s airport. The land there is expected to hold several million square feet of commercial space.

The first portion of that development—a seven-building industrial project on a 33.6-acre portion of Douglas Park now called Pacific Pointe—will run about 677,000 square feet and be offered for sale or lease.

The company announced last week the sale of a 91,145-square-foot building at the site, for $12.7 million. A Paramount-based manufacturer bought the building.

Sares-Regis bought another 160 acres at Douglas Park last October, which could hold up to 3.2 million square feet of office, industrial and retail space. A time frame for any new development on that site has not been announced.

The company last month sold a 305,361-square-foot building it just built on Sorensen Avenue in Santa Fe Springs, just north of the Orange County line off the Santa Ana (5) Freeway.

The buyer, Denver-based Industrial Income Trust, had agreed to purchase the building during early stages of construction. The deal was completed in January, according to the developer.

The Sorensen Avenue property is the first large warehouse and distribution building completed in seven years in the Mid-Counties industrial market that straddles Los Angeles and Orange County, according to Larry Lukanish, Sares-Regis’ senior vice president.

Sares-Regis’ last industrial project in OC was for a trio of smaller buildings along Miraloma Avenue in Anaheim that totaled about 120,000 square feet. Those buildings sold out within a year of their construction in 2010.

The company also counts an active multifamily division, which has a 487-unit apartment project under way in Huntington Beach.