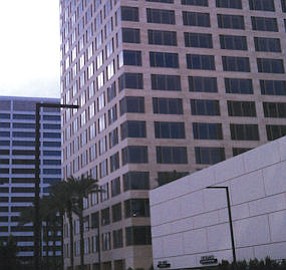 Irvine Company is getting ready for the opening of the first of two office towers in Newport Center by winding down operations at a second, older low-rise office complex a few blocks away.

Gateway Plaza, a six-building office project on the western edge of Newport Center, is expected to close by early next year, according to the Newport Beach-based developer.

The two-story buildings at Gateway Plaza, located on the 100 block of Newport Center Drive, count a roster of smaller-sized real estate, finance, consulting and other businesses as tenants who tend to lease less than 1,000 square feet each.

Brokerage data show that the largest tenant at the complex is locally based REO World Inc., an asset management company that leases close to 18,000 square feet at 170 Newport Center Drive.

Tenants said they’ve been given until the end of the year to find new space.

“Individual conversations with our Gateway customers have commenced, and we are working with them on a case-by-case basis,” Irvine Co. spokesperson Mike Lyster said.

Gateway Plaza is expected to remain vacant once the existing tenants leave the complex.

Sources familiar with Irvine Co.’s operations have suggested that the buildings at the site could eventually be torn down to make way for additional retail space that complements the company’s nearby Fashion Island shopping center.

There have been no indications by Irvine Co., or plans filed with Newport Beach’s planning department, to suggest such a plan is currently in the cards.

“We are in the early stages of long-term planning for Gateway Plaza,” Lyster said.

An agreement between Irvine Co. and the city of Newport Beach on office density limits in a multiblock area surrounding Fashion Island is the immediate reason behind the closure of Gateway Plaza.

The 20-story headquarters being built for Pimco is expected to open early next year.

The addition of the two towers would put Irvine Co. beyond the office square-footage limit for the area. A closure of Gateway Plaza, along with some other spaces in Newport Center, would rectify that problem.

Irvine Co. said in filings with the city that it plans to continue providing security, electricity and landscaping services at Gateway Plaza after its closure.

Access to the buildings will be provided only for maintenance and security reasons, according to city filings.

Gateway Plaza is one of two older—and relatively affordable—Newport Center office properties slated for closure by Irvine Co., the dominant landlord in that upscale office market.

Newport Center Drive ranks as the ninth most-expensive street for office tenants in the U.S., according to Chicago-based brokerage Jones Lang LaSalle, with average monthly rents at $4 per square foot or higher.

Irvine Co.’s website no longer lists space at San Joaquin Plaza as being available for rent, and the complex is expected to close next year.

Allowances for the existing office square footage at San Joaquin Plaza, once closed, would be transferred to 520 Newport Center Drive to allow that 19-story office to open, according to city filings.

Construction at 520 Newport Center Drive should be completed by 2015. Irvine Co. has not announced definitive leasing plans for that building, but it has suggested it could house some of its own operations.

A time frame for apartment construction moving ahead at the current San Joaquin Plaza site has not been disclosed; it would be the second for-rent residential development owned by Irvine Co. in Newport Center.

The company—the largest apartment owner in Orange County and its most active apartment developer of late—also owns The Colony at Fashion Island, a high-end complex a few blocks away from the proposed project at San Joaquin Plaza.