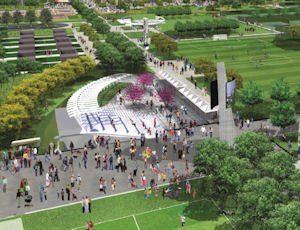 Emile Haddad has offered to put up $211 million to jump-start construction at the Orange County Great Park in Irvine, but his company’s willingness to finance and oversee development of a large part of the long-awaited 1,300-acre project comes with key conditions.

Chief among them: an approval for more homes for its land surrounding the park, and a commitment from the city of Irvine that it won’t try to sell off portions of the park land to other companies.

“We have a responsibility to make sure this is done right,” said Haddad, chief executive of FivePoint Communities Management Inc., the Aliso Viejo-based development manager of the Great Park Neighborhoods project, previously known as Heritage Fields.

“That said, there are some things we can’t do,” he added.

Haddad said he’d “much rather not do this deal” if the city doesn’t agree to the FivePoint proposal, which includes another $430 million from the developer to maintain about 1,000 acres of the park over the next 30 years.

The Great Park could see construction begin in earnest next year under FivePoint’s plan, according to Haddad.

The proposal has been forwarded to city officials in Irvine.

Irvine City Councilman Jeff Lalloway, who’s part of a committee established to negotiate with FivePoint, said the changes “ask too much of the city of Irvine.” 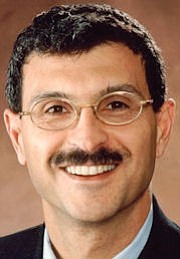 Haddad: would “much rather not do this deal” without new terms in place

The changed plans would require the city to give more land to FivePoint, which Lalloway estimates between 40 and 125 acres. He said Irvine land is now selling for between $2 million and $4 million an acre.

FivePoint’s 3,700-acre housing and commercial development, planned around the Great Park at the site of the former El Toro Marine base, broke ground earlier this year. That followed several years of delays brought on by the recession.

Groundwork for the first 726 homes planned by the developer is now well underway near Portola Parkway, with sales expected to begin next year.

The first half-dozen or so builders for the first homes planned at the development should be selected soon, according to Haddad, with land changing hands near the start of next year. About 20 homebuilders are currently in the running for the project.

“I’m selling homes here next year, and I want to be able to show people what they’ll have (at the Great Park),” Haddad said.

FivePoint announced the plan last week, and said the initial $211 million would pay for construction of Great Park facilities and amenities over the next few years.

Among the features that would go forward under the new proposal is a $124 million sports park, which would be part of a larger, Olympic-style sports village that’s envisioned to include restaurants, shops and a possible hotel. FivePoint also would pay for a new 178-acre wildlife corridor, 227 acres of trails and fields, and a 258-acre “Cultural Terrace” that could potentially hold a man-made lake.

The largest difference between the latest plan and older proposals is the elimination of a man-made canyon, according to Haddad.

The 2.5-mile man-made canyon was a centerpiece of architect Ken Smith’s initial plan for the Great Park, which was approved in 2007.

Reports have put the price tag for the initial design for the park at $50 million.

FivePoint, its partners and investors have already committed close to $1.4 billion in infrastructure and cash for the Great Park site since buying the property in 2005, according to Haddad. The company gave the land for the park itself to the city as part of the transaction with the Department of the Navy.

FivePoint now is looking to get the city to take any sale of park land off the table and sign off on plans—which go back to a proposal from 2006—to boost the number of homes that could be built on its portion of the surrounding land.

Initial plans called for about 5,000 homes and 1.2 million square feet of shops, offices and other commercial development to be built in the initial phase of the Great Park Neighborhoods.

The developer now would like the ability to build 10,700 homes on its land, including some higher-density projects near the Irvine Metrolink station, where Haddad said he envisions a downtown feel.

“It will help bring some life to the park,” Haddad said.

FivePoint has no interest in building apartments on its land, he said, despite the recent boom in multi-family development in Irvine of late.

Funding for the long-delayed 1,300-acre park has been in limbo for most of the year, after the state of California eliminated its long-standing redevelopment agencies.

The cuts included an Irvine agency that was expected to raise nearly $1.5 billion for the development of the actual Great Park.

Tax revenue from home sales at the 3,700-acre Great Park Neighborhoods also would be used to fund the park’s development.

The new funding plan would bridge some of the funding gap left by the dissolution of the redevelopment agency.

“It puts us back on track,” Haddad said. “It helps fill the donut hole in my development.”

Getting city approval for the new plan isn’t a sure thing, especially amid an election season that includes seats on the Irvine City Council and the mayor’s post.

“This is being jammed down our throat” in an election year, he said.

FivePoint has been negotiating several aspects of its development master plan agreement with the city in recent months.

Getting the city to relinquish its ability to sell off portions of land it owns at the Great Park to other developers remains one of the main sticking points.

Such a deal could compromise Five Point’s master plan for the area, Haddad said.

Haddad said he’s willing to walk away from its latest proposal and let the city sort out funding for the Great Park on its own if it insists on keeping the right to sell off land there.