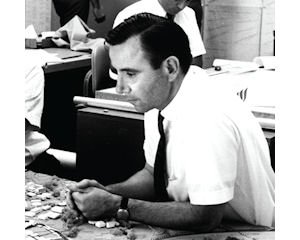 Watson: designed some of the first villages in Irvine

In the story of Irvine’s growth into arguably the country’s premier masterplanned city over the past 50 years, Raymond L. Watson plays a pivotal role.

Watson was the first urban planner and architect for Newport Beach-based Irvine Company and designed some of the first villages for the city of Irvine. He also played a key part in the creation of the University of California, Irvine.

Watson would go on to become president and later vice chairman for Irvine Co. during the developer’s growth into one of the country’s most prominent real estate companies. He also served as a board member of Walt Disney Co. for more than 30 years.

But for many in Orange County, his early work on the Irvine Ranch is the lasting legacy of Watson, who passed away on Oct. 20 from complications of Parkinson’s disease. He was 86.

Business and community leaders who knew Watson—the son of a carpenter who was raised by his grandmother in a modest upbringing—said he was instrumental in turning the long-term vision of Irvine into reality.

“When the master plan for the Irvine Ranch was nothing more than a dream, Ray brought that dream into focus and helped create something very special and unprecedented,” Irvine Co. Chairman Donald Bren said.

Irvine, incorporated in 1971, now counts about 224,000 people and is the county’s third-largest city.

In 1960 Watson joined Irvine Co., “a company six months earlier I had never heard of,” he told the Business Journal in 2006.

“But to an architect/planner, the opportunity to work for a company that owned 93,000 acres debt-free and proposing to build a new town around a new University of California campus was overwhelming,” said Watson, who worked with a team including famed California architect William Pereira in the city’s early years.

Watson credited much of his success to understanding business issues that sometimes eluded other architects.

“My view of myself was my job was more than overseeing the physical aspects (architecture) of building communities,” Watson said in a series of 2003 interviews that have been archived with the University of California, Berkeley’s Oral History Office.

“I had the responsibility of being an integral part of a very risky and challenging business,” Watson said. “Fortunately, I understand how to do economic analyses as well as an economic business major could, because I was mathematically inclined.”

He also “found out quickly, when I went to work as an architect, that I was a good manager.”

That business acumen served him well. Watson went on to serve as president of Irvine Co. in the 1970s. And after leaving the company in 1977 to start his own development company, he returned as vice chairman for Irvine Co. from 1986 to 2003.

Bren—who was part a group that acquired control of Irvine Co. in 1977 and who became sole owner of the company in 1996—called Watson “a wonderful friend and confidant.”

Along with the creation of numerous neighborhoods in Irvine, Watson worked on the development of Fashion Island and Newport Center. He also was a longtime supporter of UC Irvine’s development.

A pedestrian bridge used daily by thousands of students at UCI’s “front door” was named in his honor in a 2005 ceremony.

“Ray Watson was instrumental in advocating and advancing the vision of the great new city of Irvine around the new University of California, Irvine campus,” UCI Chancellor Michael Drake said. “The campus has lost a great friend and supporter.”

Along with his work at Irvine Co., Watson played a key part in the history of Burbank-based Disney, helping oversee the 1982 opening of Florida’s Epcot Center, which at the time was touted as the largest private land development project ever.

Watson said he first met Walt Disney in the mid-1960s, when plans for Epcot were in their infancy.

Walt Disney “figured maybe I could be helpful to him thinking about what this experimental prototypical community should look like,” Watson said in 2003. “I was flattered.”

Watson joined the board of Walt Disney Co. in 1974, the same time as Shirley Temple.

“She’s a very smart lady,” said Watson, who was one of the few outside directors on the company’s board at that time.

He served as Disney chairman during a nine-month stretch in 1983 and 1984, a period that saw him help fend off a pair of hostile takeover attempts.

Watson retired from the Disney board in 2004 and continued to live in his home of 48 years, in Newport Beach’s East Bluff—one of the first Irvine Co. villages that he helped design and plan.

He is survived by his wife of 58 years, Elsa Watson, and their four children (and spouses): Kathy (husband Bill), Bryan (wife Lisa), Lisa (husband Michael) and David (wife Julie).

Watson also is survived by his sister Doris and 10 grandchildren.

“Both your career and your family need a vision and constant care,” Watson said in 2003.

“Our father was passionate about his work and could never imagine doing anything else professionally,” son David Watson said.

A memorial service is tentatively planned for Nov. 11 in the Irvine area.