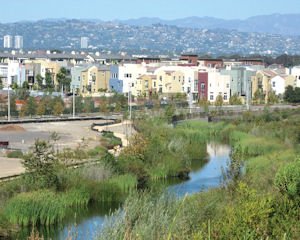 For sale: the bulk of remaining undeveloped land at Playa Vista

Irvine Company is eyeing the Westside Los Angeles neighborhood of Playa Vista for a sizable apartment development, according to real estate sources.

The Newport Beach-based real estate investor and developer is said to be involved with a consortium of developers and homebuilders that’s bidding for a large portion of land now up for sale at Playa Vista, a nearly 1,100-acre neighborhood located near the San Diego (405) and Marina (90) freeways.

The land said to be up for sale runs about 100 acres and in total could sell for more than $200 million, according to real estate sources.

Irvine Co. is interested in taking over a portion of that land, which could hold roughly 1,500 apartments, sources said. Other developers would handle Playa Vista land that’s expected to hold between 600 and 800 for-sale homes.

The consortium Irvine Co. is backing is said to be headed up by the land division of Calgary-based Brookfield Residential Properties Inc., who would likely bring on other homebuilders as partners at the project. But it appears a final deal has yet to be struck, and another bidding group or two also may remain in the hunt for the land, sources said.

The proposed Playa Vista sale hasn’t gotten too much attention, despite its prominent location in one of L.A.’s fastest-growing neighborhoods.

“It’s a quiet deal,” said one real estate executive familiar with the transaction.

The land is currently held by Playa Capital Co., a company owned in part by Goldman Sachs and other Wall Street partners.

Irvine Co. officials declined to comment on the speculation.

A Playa Vista project would mark a notable new market for Irvine Co.’s fast-growing apartment division, which now bills itself as the largest owner and operator of apartments in the state.

The company now owns about 45,000 apartments and 125 complexes in California, with a majority of those apartments in Orange County.

The company also has been a long-time owner of a pair of office complexes on the Westside of Los Angeles. Its only other LA-area property is an office in Pasadena that it bought earlier this year.

Apartment development has been a focus for Irvine Co. over the past few years, and looks set to continue for the foreseeable future.

The company has more than 5,000 apartments in development or under construction in Irvine and Tustin, and also has projects going up in Silicon Valley.

Playa Vista has been described as the first new master planned development on the Los Angeles coast in almost 50 years and the last tract of undeveloped land on the Westside. It currently includes more than 3,200 residences and 2 million square feet of office space.

The sprawling development is situated about a mile from the ocean and once held the headquarters of aviation pioneer Howard Hughes.

Plans for a new, 111-acre phase of additional development at Playa Vista, long in the works, recently got the go-ahead after years of environmental-related lawsuits.

This summer, a group headed up by Dallas-based Lincoln Property Co. broke ground on Runway at Playa Vista, an estimated $250 million mixed-use project expected to hold a 200,000-square-foot retail center and 420 apartments, along with some office space.

The land said to be up for sale includes the bulk of remaining undeveloped land at Playa Vista.