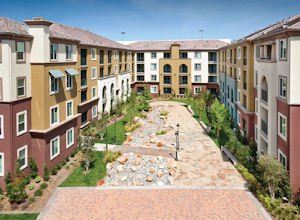 Gateway complex: next to planned development

Irvine Company has bought an industrial property in the Platinum Triangle, where the real estate developer plans to build a new apartment complex.

Newport Beach-based Irvine Co. recently closed on the purchase of the 6.2-acre site at 2100 E. Orangewood Ave. in Anaheim.

The tract holds four industrial buildings totaling about 140,000 square feet that are set for demolition. The site, near the intersection of State College Boulevard and Orangewood Avenue, is across from Angel Stadium.

Terms of the sale weren’t disclosed. The property—one time home to Everest Electronic Equipment—was sold by a pair of family partnerships with ties to the electronic equipment cabinetry maker, according to property records.

Irvine Co. plans to build a 395-unit apartment project at the site, which sits next to its Gateway apartment complex, an 884-unit complex that the company bought about two years ago.

No time frame for construction was disclosed. The building currently is leased to Accurate Metal Solutions LLC, whose lease runs at least through 2013, according to sources.

A small office building and a Del Taco restaurant next to the industrial property are not part of the sale and won’t be affected by the development, according to city filings.

The new project is envisioned as a second phase of Irvine Co.’s Gateway project, which opened in 2008. The complex, just off the Santa Ana (I-5) Freeway, was built by Colorado developer Archstone.

Irvine Co. paid a reported $241.8 million for the Gateway complex in October 2010, its first-ever investment in the Platinum Triangle, the largely industrial, 820-acre area around Angel Stadium that has been eyed for housing, offices and retail redevelopment in recent years.

Company officials said at the time of the 2010 purchase they were bullish on the apartment market around the Platinum Triangle, which has seen more than 2,000 apartments built during the past five years or so.

The latest deal adds to an already-crowded apartment development pipeline for Irvine Co., the largest owner of apartments in OC as well as the most active builder of for-rent properties in the area.

The company has thousands of apartments going up in the Irvine Spectrum, a 980-unit project moving ahead at the Park Place mixed-use campus near John Wayne Airport, and another sizable project on tap for the Tustin Legacy development.

Outside OC, it is building apartments in Silicon Valley and has been eyed as a potential apartment builder at the Playa Vista project in Westside Los Angeles.

It currently owns 116 complexes across California and ranks as the country’s 28th-largest apartment owner in the U.S., with almost 45,000 units in its portfolio, according to trade publication Multifamily Executive magazine.

The new Platinum Triangle development proposed by Irvine Co. will run four stories tall, with units ranging from about 600 square feet to 1,300 square feet, according to city filings.

The architecture of the project is likely to mirror much of that seen at the existing Gateway project, according to the developer’s plans.

Irvine Co.’s latest project in the Platinum Triangle is one of several apartment developments proposed along a small stretch of Orangewood Avenue.

The three-building Stadium Business Park, located a few buildings down from Irvine Co.’s newest buy at 2210 E. Orangewood, is in escrow for a sale, according to brokerage data.

The 3.3-acre site was being marketed for sale at about $9.4 million, with redevelopment a possibility for any new owner of the property, according to marketing materials for the property.

A 525-unit apartment complex is also being planned by the Newport Beach office of Miami-based LNR Property LLC across from Irvine Co.’s site.

The one-time industrial site is situated on a 12.5-acre tract at 2015 E. Orangewood. It had initially been expected to hold 878 units for sale—a combination of high-rise condo towers and midrise townhouses—under the A-Town Stadium name.