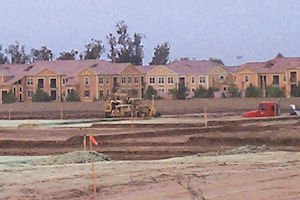 Cypress Village: site of future homes, which will be built alongside apartments that opened this year

Irvine Company is planning to break ground by early next year on the first batch of for-sale homes at its Cypress Village community in North Irvine.

The Newport Beach-based developer filed plans with the city earlier this month to build 329 homes and condominiums on a nearly 50-acre portion of land it owns just off Trabuco Road, next to the Santa Ana (I-5) Freeway.

The land—one of several undeveloped tracts that Irvine Co. owns between Jeffrey Road and Sand Canyon Avenue—sits next to the company’s Cypress Village Apartment Homes, a 1,677-unit rental development that opened up earlier this year.

Sales at the 329-home project—which looks to incorporate a few relatively unique design features—are expected to begin by April.

Early-stage ground work at the site is under way.

The developer said its Irvine Pacific building division will handle the initial phase of construction at the site. Other builders are expected to join Irvine Pacific as Cypress Village is built out in later stages.

If Irvine Co. had opted to sell the land, it would likely have seen close to $100 million in land sales, based on other recent land transactions in Irvine.

The new homes are the latest for-sale project slated to go up on the Irvine Ranch, the fourth best-selling masterplanned community in the country last year with 764 sales, according to Irvine-based John Burns Real Estate Consulting LLC. Irvine Co. has seen more than 1,200 home sales on its land this year, according to company officials.

Much of the company’s sales activity is centered in North Irvine, where Irvine Co. is moving ahead with homebuilding in its Stonegate and Portola Springs communities. Construction also continues to move ahead at the company’s Laguna Altura development off of Laguna Canyon Road.

Stonegate and Laguna Altura—which both opened last year and are largely being built by Irvine Pacific—are each more than 50% built out now.

The most unique of the proposed product offerings appears to be a so-called “motorcourt” design, where up to four detached homes would be clustered around a privately shared, extended driveway. Some 104 homes in the development—ranging from about 2,200 square feet to 2,600 square feet—are planned in the design, according to city filings.

“While the motorcourt design is not new, the idea of selling this housing type as a simple fee product, as opposed to condominium unit, is a relatively new concept in the city,” Irvine Co. said in its application to the city for the plans.

The motorcourt design also has been approved for some of the new homes going up in the latest phase of development at Portola Springs.

“Overall, this development is similar to a typical condominium-style motorcourt development, but it provides homeowners, who want to own their own land, a new alternative within the city,” according to Irvine Co. documents filed with the city.

Plans for the initial Cypress Village development also call for 141 three-bedroom condo units of under 2,000 square feet each and 84 single-family homes running up to 2,600 square feet with traditional driveways.

Options for some of the proposed new homes will include a “super California room,” an extended outdoor room connected to the house with open walls, and a solid roof.

“California rooms have gained popularity in recent years and have been provided in many of Irvine’s neighborhoods,” Irvine Co. said in filings with the city. “With this master plan, the applicant wants to provide residents with an option of extending the California room … into the back yard area to create a more unique indoor-outdoor experience.”

Also proposed for the homes is a “California garage,” featuring a 13.5-foot-by-8-foot room added onto the rear end of the garage.

The California garage can be built according to a variety of owner-specified options, according to Irvine Co. plans, including a separated office, gym, play area, dog wash area, or just additional garage space.