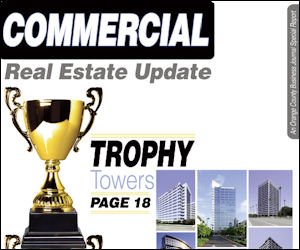 Today’s market for office sales in Orange County is a far cry from the go-go days of 2006 and 2007, when higher-end buildings here commanded sale prices approaching $400 a square foot and traded hands between eager investors like chips at a poker table.

But don’t tell that to Emmes Group of Cos.

The New York-based real estate investor thinks its 19-story tower in Irvine’s Park Place mixed-use campus, called The Michelson, is worth nearly $100 more per square foot than any other large office in the area to trade hands of late—and perhaps much more than that.

The Michelson is on the market without a firm asking price, but the buzz is that Emmes—which has brokerages Eastdil Secured and Orion Property Partners marketing the property—is seeking a price as high as the tower. The building was built in 2007 during the area’s last big flurry of commercial development.

Sources said Emmes could be looking for a sky-high price of $500 to $525 per square foot, which would suggest a possible sale price of up to $280 million or so. Such a price would likely set a record for a single-building office sale in OC, as well as a local record for a per-square-foot price for a larger office property. 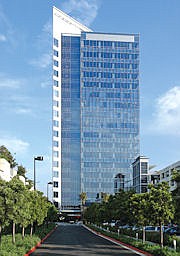 The Michelson: Park Place tower could fetch as much as $280 million

“There’s already some qualified groups looking (at the building); the only question is how high the bidding will go,” said Paul Jones, vice president for the Newport Beach office of CBRE Group Inc. and part of one of the region’s most active investment property brokerage teams.

A sale at the price Emmes is rumored to be seeking would make a lot of other recent local investors a lot more comfortable about their own big-dollar investments. Buildings in the area around John Wayne Airport topped out at prices a little more than $400 per square foot during the last commercial real estate boom.

The highest square-foot price paid for a large, airport-area building that was sold without highly leveraged financing of the sort now largely unavailable came in the sale of 4400 MacArthur Blvd. The nine-story Newport Beach office traded hands in June 2007 for $64.3 million.

An affiliate of Boston-based TA Associates Realty paid nearly $422 per square foot for the 152,300-square-foot office that counts Bank of the West as its largest tenant. The investor still owns the property.

In 2010, Los Angeles-based Kilroy Realty Corp. paid about $103 million, or almost $380 per square foot, for an office located a few blocks from the airport at 2211 Michelson Drive. That building, like The Michelson, was built during the last commercial boom and is considered to be among the region’s better office buildings and considered comparable to a handful of other trophy properties in Irvine, Newport Center and Costa Mesa.

Why should Emmes’ tower command a price potentially $140 per square foot more than the 2211 Michelson sale? Call it the recent trophy-property premium.

“They picked a good time to hit the market,” Jones said. “This is the first (trophy property) in a while to be put up for sale.”

An improving office market here and in other West Coast markets, the building’s quality and recent construction, as well as a healthy dose of good timing are all factors in the expected top-tier pricing, according to market watchers.

“It is definitely among the top 10 best assets in OC,” said Andy White, director of the office leasing practice for Irvine-based brokerage 360 Commercial Partners.

In the Eastdil and Orion Property marketing materials for the Michelson building, the six OC properties held up as comparable offices include a trio of properties in glitzy Newport Center, the Cesar Pelli-designed Plaza Tower in Costa Mesa’s arts district, and the 2211 Michelson building in Irvine.

Investors have little chance of getting their hands on the majority of those buildings. Newport Beach-based Irvine Company owns all three Newport Center properties and isn’t expected to ever sell them.

Likewise, Plaza Tower, which is run by C.J. Segerstrom & Sons, is a long-term investment for that building’s owners.

For nonlocal investors, most likely backed by pension fund and institutional investor money, a $500 per-square-foot sale price might actually be seen as a relative bargain compared to other top-tier buildings on the West Coast. Trophy properties have been selling for close to $800 per square foot in San Francisco and upward of $500 per square foot in Silicon Valley.

The Michelson is called “one of Southern California’s newest and most prestigious trophy office towers” by its brokers.

“It is arguably the best building (in OC),” Jones said. “It looks like it should be in downtown L.A., but it’s in Irvine.”