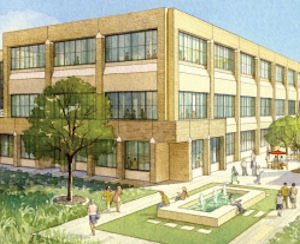 Mayfield: former mall had been eyed for homes, now set for offices

The best piece of business done by Newport Beach-based homebuilder William Lyon Homes Inc. over the past year appears to be a commercial real estate transaction.

Rockwood said it paid $90 million for the Mayfield Mall property, which William Lyon Homes had planned to turn into a residential development of about 260 homes.

The new owner expects to turn the roughly 500,000 square feet of older buildings at the site, located on the border of Mountain View and Palo Alto, into office space.

The buildings are expected to be garner heavy interest from Google Inc. and other area technology companies looking for space in the region’s tight office market.

Specifics of how much money William Lyon Homes made on the sale have not been disclosed. Still, the deal looks to an extremely profitable one for the builder, led by chief executive and long-time OC 50er General William Lyon (see Lyon’s OC 50 profile in Special Report starting on page 21).

The homebuilder owned the property for less than a year and had yet to commence any new construction at the site. It bought the land last October, paying an estimated $65 million, according to local market reports.

The acquisition last October was said to be financed by a subsidiary of one of William Lyon Homes’ largest noteholders, according to court documents.

The restructuring left Gen. Lyon and his family owning about 20% of the builder, plus warrants to buy an additional 9% of the company’s common stock.

Lyon and his family owned about 95% of the company, which he took private in 2006, prior to last year’s pre-packaged bankruptcy.

The Mayfield site was among the largest new home projects in Northern California planned by the builder in several years.

“The Mayfield Project is a fantastic opportunity, a sign of the company’s long-term plans and the willingness of the noteholders and senior secured lender to support our plan,” executive vice president Matthew Zaist said last November.

All told, the builder closed on the sale of 128 homes last quarter, up from 111 homes a year ago. It also reported 321 new home orders during the quarter, nearly double a year ago.

The company builds in California, Arizona and Nevada.

“Our sales activity has significantly exceeded our business plan,” Zaist said last month. “As a result of the strong activity, we are reducing incentives, selectively increasing prices, and we now expect to open new communities sooner than initially expected.”

William Lyon Homes is involved in a number of local housing developments, including projects at a pair of former school sites in Irvine—Vista Verde and Alderwood elementary schools—where the builder plans to build a total of 103 homes.

The builder inked a deal in 2009 with the school district to buy the land parcels, which total about 14.5 acres, for nearly $29 million. The projects are still being reviewed by the city’s planning commission.

William Lyon Homes also was recently named to be one of the initial builders tapped for homebuilding at Sendero, a new community going up near San Juan Capistrano on land owned by Rancho Mission Viejo LLC.