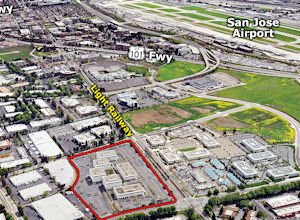 Irvine Co. has snapped up a six-building Silicon Valley office complex in what looks to be the Newport Beach-based company’s largest acquisition of the year.

The real estate investor and developer recently closed on the purchase of the Silicon Valley Center in San Jose, a 439,000-square-foot office complex less than a mile from the city’s airport.

The multitenant office campus includes buildings running between three and five stories, with the largest totaling about 80,000 square feet.

The 19-acre San Jose campus was sold by another Orange County real estate investor, Irvine-based LBA Realty. Terms of the sale were not disclosed.

The Silicon Valley office market has been booming lately, and the building likely traded for close to $130 million, or about $300 per square foot, according to real estate sources.

That price would put it among the top three office sales seen in the Silicon Valley so far this year, according to brokerage data.

It also appears to be the largest office-related purchase by privately held Irvine Co. since it bought another Silicon Valley office campus late last year, the eight-building Central Research Park in Sunnyvale.

The 468,000-square-foot Sunnyvale campus, located about 8 miles from the Silicon Valley Center, traded hands last October for $132 million, or about $282 per square foot, according to local reports.

Irvine Co. is also pushing development in Silicon Valley, where the office market has grown tight thanks to its cluster of high-tech tenants.

The company is moving ahead on the first phase of a six-building, 900,000-square-foot office campus planned in Santa Clara.

The first phase of the speculative office development, called Santa Clara Gateway, will hold three five-story buildings totaling about 447,000 square feet. Those offices are due to come online in mid-2013, and the project already has one or more large tenants lined up as likely users, according to sources.

Irvine Co. executives said the company is in the “advanced stages” of planning for the development of the final phase of the Santa Clara Gateway project.

Silicon Valley is the strongest office market in California, with vacancy levels of about 7% for the area’s best space, according to recent reports.

The six buildings at Silicon Valley Center have about a 10% vacancy rate, according to brokerage data.

Irvine Co. also has apartment development plans under way in Silicon Valley, where it currently has 11 complexes, according to the company’s website.

It recently opened the first phase of Crescent Village, a 1,750-unit complex in north San Jose. It’s the company’s first new apartment complex in the area in several years.

The deal for Silicon Valley Center is the second notable transaction involving Irvine Co. and LBA Realty of late.

Irvine Co. is in the early stages of turning a former parking lot near the headquarters of Western Digital Corp. into an upscale, 980-unit apartment complex at the Park Place mixed-use campus near John Wayne Airport.

Irvine Co. last year paid $101.4 million to LBA—the owner of much of the Park Place campus in Irvine—and another company for the 14 acres of land and residential entitlement rights at the site, according to sources.

That works out to a price of about $7.2 million per acre, or roughly $103,000 for each apartment planned at the new complex, which is expected to be called Park Place Michelson Apartments.