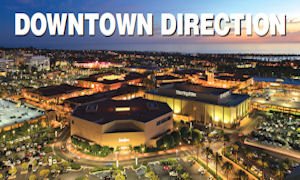 “What we’ve tried to create is the downtown of Newport Beach, if not even the downtown of broader Orange County, where people do come to shop, they come to eat, they go to work, they live and they enjoy the outdoor environment,” said Dan Sheridan, president of Irvine Co. Retail Properties.

The developer has geography on its side.

Fashion Island also is situated amid a highly desired draw area for retailers. Big Canyon County Club is the center of a neighborhood full of upscale households right next door. More are nearby, with Corona del Mar and Newport Center to the south. Newport Harbor features deluxe homes and yachts to the north.

Civic institutions also promise a downtown feel. A $128 million civic center and 16-acre park is in the works. It includes a new City Hall, which will move from the Balboa Peninsula, an expanded Newport Beach Central Library, and a 450-space parking structure.

Those developments, along with recent and pending additions to Fashion Island’s retail lineup, add up to the mix of uses—office, retail and residential—that prompt talk of the “live-work-play” atmosphere that many big cities aim for with their downtowns.

“With the combination of the office and the living places and the entertainment that the shopping center brings, those different types of uses and attractions are exactly what most people think of when they think of a downtown like a Chicago or even a Manhattan,” Sheridan said. “It’s all those different uses working together and people not necessarily having to drive. It’s all right there at their doorstep.”

Fashion Island’s retail merchandising has been a key to creating a downtown feel, making over the shopping landscape and bringing new amenities.

The recently re-opened Island Cinema is Fashion Island’s version of a red carpet venue. A 32,000-square-foot Whole Foods Market is set to open in September.

The rest of Fashion’s Island’s retail strategy has zeroed in on what Sheridan called “more street-type retailers that you might see on Melrose (Avenue) in Los Angeles and SoHo or the Meatpacking District in New York.”

Storefronts at Fashion Island face shaded walkways connected by central courtyards with fountains. There’s new plush seating and more outdoor dining areas, setting up strolls in the fresh air that take on the feel of a metropolitan shopping district.

Irvine Co. executives said the renovation helps Fashion Island stand out from competitors. That’s a short list, with nearby South Coast Plaza the only one in Orange County of similar stature.

Executive Marketing Director Debra Gunn Downing said the center aims to keep its standing by “making sure we attract only top-tier retailers and brands because that’s what our sophisticated customers expect from us.”

Plenty of retailers have bought into the new vision for Fashion Island.

More than 40 new stores have opened over the past two years. The change-out has brought plenty of hipness and high-end appeal, ranging from a showroom for electric vehicle maker Tesla Motors, denim retailer Earnest Sewn’s new shop, and the arrival of fashion and pop-culture boutique Kitson, whose store on Robertson Boulevard in Los Angeles regularly attracts celebrities.

More are set to come, including the home goods and women’s fashion boutique Roberta Roller Rabbit, named after a fable that founder Roberta Freymann discovered on a piece of fabric found in India.

The tenant mix at Fashion Island helped sway Freymann, who usually puts stores in urban shopping districts, with shops on Lexington Avenue in New York and in San Francisco. The Fashion Island store is scheduled to open this summer and will be the only one in OC.

“Fashion Island is not only a destination for fabulous clothes but offers a wonderful home assortment as well,” Freymann said.

Offering visitors Orange County exclusives with stores such as Freymann’s is another part of the Fashion Island remake.

Tommy Bahama, the island-inspired apparel and accessories maker, has a grand opening set for Labor Day on its first-ever home store.

“There’s not a better market for us than in Orange County, and then when you say, ‘Where in Orange County do you go,’ it’s just demographically perfect,” Tommy Bahama Group Inc. President Doug Wood said. “Since Fashion Island already has some home furniture stores, people are used to going there for their home furniture.”

The store’s pricing ranges from $35 home fragrances and candles all the way up to bedroom sets that could easily go for $10,000.

Dining has also been elevated in the process of remodeling Fashion Island.

“A key part of this whole transformation too was an emphasis on food and really trying to elevate the dining options at the center,” Sheridan said. “We want to have different types of food offerings for different types of visits and different types of people, but certainly the focus has been to bring in fresh-to-market, unique restaurants that you can’t find anywhere else in Newport Beach or Orange County.”

There’s also Fig & Olive, which will open next summer in a restaurant pad that’s part of an additional 22,000 square feet currently under construction at Fashion Island.

“They have the whole dynamic of the community of restaurants to bring some of the best restaurants in the U.S. both on the casual level at the center and also at the high-end level,” Fig & Olive founder Laurent Halasz said.

Fig & Olive, with locations that include New York’s Meatpacking District and Melrose Place in West Hollywood, is known for high quality olive oils used across its entire menu.

“Fashion Island is becoming the center of Orange County,” Halasz said. “I would say the dynamic a few years ago was not as amazing as it is now. There is no other place like this where you will have this type of destination in Orange County.”