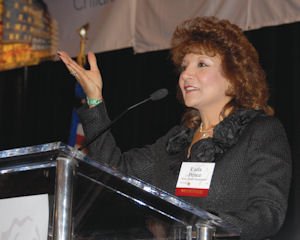 Laila Pence got an early start as a financial planner and never looked back.

“I never did anything else,” she said. “I stumbled on it my last year of school in 1980, and I felt this was the area I wanted to be in—investment and planning.”

It was quite a stumble for Pence, who is president at Pence Wealth Management in Newport Beach, a firm she and her husband, Dryden, founded 12 years ago.

Laila Pence’s career and the firm’s growth have gotten her recognized as the No. 1 local financial adviser on the Business Journal list earlier this year. She was No. 13 this year among the top 100 women advisers in the U.S. on an annual list compiled by Barron’s magazine, a jump from No. 26 last year.

Pence Wealth Management has about $850 million in assets under management, up about 34% from last year. A typical client has net worth of $5 million, with the average account holding $2 million.

Laila Pence, a native of Egypt, describes her life as “living the American Dream.” She and her family moved to the U.S. when she was 12, and under conflict.

The family briefly lived in Cairo before moving to New York.

“My dad was in banking and got a job here,” Pence said. “He had always wanted to move to the U.S. But it was very tough. We came here not speaking a word of English, and it’s not like Arabic was a second language anywhere. And it was very cold.”

Pence later moved westward to attend University of California, Los Angeles, where she earned her bachelor’s in economics. She set off working with other financial advisers and received a Certified Financial Planner designation in 1981.

Meeting her husband was another turning point in her life.

“After our first date, I thought to myself, ‘It would be great if he folded his business and worked with me,’ ” Laila Pence said. “He hadn’t even asked me for a second date yet.”

Dryden had been running a regional investment banking firm in Fort Smith, Ariz. He sold the firm and joined Laila to form Pence Wealth Management. He is now chief investment officer at the firm. Dryden also serves as lieutenant colonel in the U.S. Army Reserve and heads an army intelligence unit.

The couple complement each other well “because we don’t do the same thing,” according to Laila Pence.

“He focuses on managing the money and the portfolios, and I focus on meeting with the clients and bringing in the business,” she said. “The two of us have brought the business to much bigger heights.”

The firm runs on five financial advisers and 19 employees total. Each adviser caters to a particular niche industry, such as charitable giving or insurance.

“We have really good team members,” Laila Pence said. “I always tell my teammates that there are a lot of people who do what we do. Newport Beach is a wealthy area, and there are a lot of advisers out there. The key is to remember that people’s money is very, very important to them, and we’re there to serve them. Clients are drawn to us when they know how sincere we are and how much we care.”

One of the “Pence Principles” by which the firm operates is that clients “don’t care what you know, until they know you care.”

The firm aims to capitalize on cash flow, as well as diversification of its portfolios.

“Cash flow trumps volatility,” Laila Pence said. “I cannot control what happens in the market. What I can control is to put together portfolios that have great companies that pay dividends. We design portfolios that produce about 4% to 6% in cash flow.”

Laila and Dryden give to local and national organizations, including Orange County United Way, Saddleback Church, the Segerstrom Center for the Arts and the U.S. Army.

Laila Pence considers it a plus that she has spent part of her childhood in Egypt.

“The financial business is still a male-dominated industry, and to be an Egyptian, a foreigner, it’s really unusual,” she said. “But it certainly has helped me appreciate what I have and what I do here. It helps me relate to clients about what the world outside is like. From that standpoint, it helps that I come from a different country. I can give someone a much bigger perspective about not just numbers, but a perspective of what they have.”