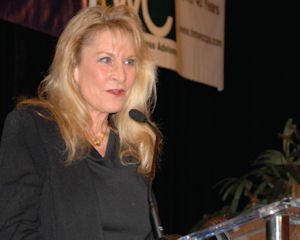 Canaday: “thankful for what I’ve been given”

The real estate professional is co-chair for the Girl Scouts of Orange County’s annual fundraising gala this fall, and she took the opportunity to let the crowd of nearly 1,000 know she’s looking for donors and sponsors.

“Lee Ann’s a real advocate of that,” she said.

Nygren met Canaday at the Girl Scouts’ fundraiser a few years ago.

“I introduced myself to her and asked if she was a girl scout,” the organization chief recalled. “She said, ‘Absolutely,’ and then she proceeded to sing to me the Brownie Smile song. She knew every word of it.”

She works seven days a week between her real estate business, the Canaday Group, and her philanthropic efforts, but she tries to squeeze in tennis once a week.

“I wear a lot of hats, and if I don’t work seven days a week, I can’t get everything done,” she said. “To me, if you don’t work hard it’s not really moral.”

Canaday made her way to real estate through teaching. She was an algebra teacher looking for a way to earn extra money.

“I couldn’t make enough money teaching, so I got into real estate to supplement that void,” Canaday said.

She started selling homes on the side in 1979. Then she started buying homes as rental properties.

Canaday originally planned on buying an apartment building, but she wound up buying houses instead.

She made four times her teaching salary in her first year selling real estate. She still rents her homes these days, and she’s opening real estate offices.

Canaday said she chose Re/Max because of its global presence with a presence in 90 different countries.

International buyers account for about $82 billion in U.S. home sales.

“I want a piece of the foreign buyers,” Canaday said. “Re/Max is the perfect vehicle for that.”

She also focuses on the short-sales segment through an office she maintains in Costa Mesa.

Canaday does all kinds of marketing, online and offline. She sells homes directly through her half-hour TV show that she’s been doing since 1992 and which airs Saturday mornings on KDOC-TV.

“I was way before Flip that House,” she said.

One of the things she’s learned in her 30-plus years in real estate is to try to be prepared for the unexpected.

“The thing you learn is never to be surprised, and always to be prepared,” she said.

She was one of 12 women honored by Girl Scouts of Orange County last year and appeared as one of the dozen women in the Girl Scouts’ keepsake calendar, which is unveiled at the Celebrate Leadership fundraiser each year.

She was also a presenting sponsor for the first annual ball of Susan G. Komen for the Cure Orange County, based in Costa Mesa.

The amphitheater at Chapman is named after the Canaday family, as well as a graduate lounge. Canaday is on Chapman’s board of counselors, an advisory board for the dean of the George L. Argyros School of Business and Economics.

Canaday said she’s involved with charities because she wants to help.

“I feel so thankful for what I’ve been given that I want to give back,” she said.