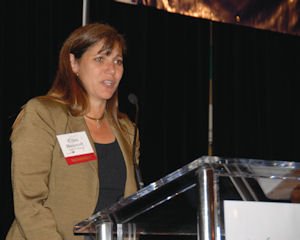 Being able to run on just a few hours of sleep each day is a “blessing” for Ellen Bancroft, who carries many a title on her shoulders.

“I work a lot,” she said. “I stay up really late and work after the kids go to sleep. Technology has made it a lot easier to work, too.”

Bancroft was one of the five local businesswomen honored at the Business Journal’s 18th annual Women in Business awards luncheon June 5 at the Hyatt Regency Irvine (see related stories, pages 1, 6, 7, 9).

Her hard work as an attorney is reflected in a lengthy list of transactions, including more than 40 initial public offerings, more than 50 public and private acquisitions, and other private equity and venture capital investments.

Her focus remained unchanged over the past two decades, years that she said “went by so fast.”

Bancroft started at Costa Mesa-based Rutan & Tucker LLP in the early 1990s, when she moved to California from Missouri, expecting a short-term stay.

That never panned out.

“I’ve been out here for 22 years now,” she said. “I absolutely love OC. It’s such an open community, a great business climate, great schools. It’s been a lot of fun.”

She spent about five years at Rutan before going to the Irvine office of San Francisco-based Brobeck, Phleger & Harrison LLP in 1995. She spent eight years there as a partner in the business and technology practice group before the firm filed for bankruptcy and shut down in 2003.

Bancroft had also served as the co-chairperson of Brobeck’s venture capital group during the last four years of her stint there, overseeing corporate and securities transactions, venture capital financing and other deals.

“I was there until the bitter end,” she said.

Bancroft and six other partners who had been at Brobeck joined Dorsey in February 2003. Dorsey at that time also got 11 ex-Brobeck associates, a boost that tripled the size of the firm’s Orange County office.

Bancroft has been recognized as a Southern California Super Lawyer for four years straight and has been on the list of Best Lawyers in America since 2007. She also was named Lawyer of the Year last year by Best Lawyers.

Her roster of companies stretches across the U.S., but many are based locally.

She has worked with Irvine-based Broadcom Corp. for many years through its initial public offering and follow-on investments.

“I’ve done quite a few acquisitions for them over the years,” she said.

“I was also the underwriter for Volcom,” Bancroft said. “For the first time, my daughter was excited about what I did.”

Bancroft makes sure she finds time to spend with her 17-year-old daughter and 12-year-old son. Part of that is taking the early shift for volunteering at their schools and participating in sports activities.

“I’m the scorekeeper for my son’s baseball game,” she said. “That to me is the most fun part of the week.”

She also is involved in the CEO Roundtable at University of California, Irvine, and OC United Way Women’s Philanthropy Fund.

She also joined the board for Big Brothers Big Sisters, which has an Orange County office in Tustin.

Being on the board of directors has been a “great experience,” said Bancroft, who advises the boards of many public and private businesses.

“I was on [Dorsey’s] policy committee for the last six years, too,” she said. “Sometimes you’re looking at it from the outside in [when you advise boards]. But having that background, you know the dynamics and issues when you’re in that position.”