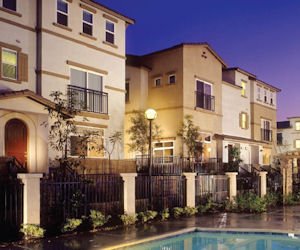 Orange County’s red-hot sales market for apartments has extended to Tustin, where a new complex has sold at one of the higher per-unit prices seen in the region of late.

San Mateo-based JB Matteson, a real estate developer and investor, recently closed on the purchase of Tustin Cottages, a 93-unit apartment property just off Red Hill Avenue and the Santa Ana (I-5) Freeway.

Tustin Cottages is believed to be the largest apartment complex in OC to have traded hands this year at a price of more than $400,000 per unit, according to brokerage data.

Other larger, high-end complexes across the county have been selling more than $100,000 per unit below that level.

Club Laguna, a 421-unit complex in Laguna Beach that traded hands in October for a reported $121 million, was the most expensive apartment complex sale in terms of total price in OC. The Club Laguna sale came to about $287,000 per unit, well below the Tustin project’s per-unit price.

The residences, located at 1361 El Camino Real, average about 1,647 square feet per unit—larger than the area’s typical apartment units. Each apartment has at least three bedrooms along with direct access to a two-car garage, according to marketing materials for the property.

The 153,169-square-foot property includes 24 three- and four-story buildings. The complex is about 92% occupied.

The property was built and sold by Arcadia-based Nevis Homes.

A unit of Nevis Homes paid a reported $15 million for the Tustin Cottages property in 2004, which at the time included 65 apartments.

The builder razed the existing units, and initially eyed the site as a condominium redevelopment, but later switched to apartments.

Tustin Cottages was the first new apartment complex to open in Tustin in nearly 15 years, according to Joe Leon, managing director for the Irvine office of Jones Lang LaSalle. Leon worked on the sale with colleague Javier Rivera.

Among other new area projects now in the works is a pair of apartment projects being developed in part by Newport Beach-based Irvine Company; the projects are expected to see early development work start next year at the city’s Tustin Legacy site.

The purchase of Tustin Cottages “is a great opportunity for them to capitalize on an extremely high barrier to entry market,” Leon said in a statement. “Their diversified portfolio throughout the western U.S. made Tustin Cottages an ideal property to support their investment strategy.

Leon said he expects to see demand for high-end apartment complexes in Southern California continue into 2013, thanks to job growth in the area.

Jones Lang LaSalle projects job growth in OC to average about 1.9% over the next three years, which would result in the area’s unemployment rate falling to 6.6% by 2016, according to the brokerage’s latest annual multifamily report. Unemployment here now stands at 7%.

Other area apartment investors have been eyeing sites near OC for purchases, due in large part to expected employment gains.

Western National Realty Advisors, a unit of Irvine-based apartment investor and developer Western National Group, said in mid-December that it closed on the $42.2 million purchase of Parcwood Apartments, a 312-unit apartment community in Corona.

“We have been aggressively seeking acquisition opportunities in strong submarkets that have the best outlook for recovery,” Jerry LaPointe, Western National’s vice president, said in a statement.

“Parcwood’s close proximity to Orange County and other employment hubs, which reduces commuting time for residents, will allow it to compete very well as the area’s economic fundamentals continue to improve,” LaPointe said.