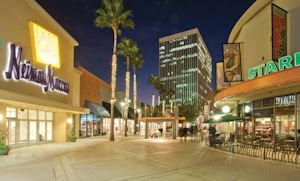 Outlets at Orange: No. 11 saw 21% jump in sales, biggest in percentage terms

Orange County’s largest shopping centers saw taxable sales rise about 7% over the 12 months ended in June, as property and store improvements, along with a number of OC-exclusive tenants, helped draw customers amid the ongoing economic recovery.

The 29 largest shopping centers here—a mix of malls and outdoor centers—had taxable sales total $6.9 billion for the 12 months through June, according to this week’s Business Journal list. That marked the largest gain in the past three years, a streak of annual increases that started after a 7% dive in 2009.

The latest gains came amid a surge of leasing activity, store redesigns and renovations at a number of shopping centers.

Nineteen shopping centers saw taxable sales grow during the 12-month period, based on data for taxable sales from cities and the centers. Three centers had declines, one was about flat, and comparable totals for the prior 12-month period weren’t available for six others.

South Coast Plaza once again topped the list, with a more-than-10% increase in taxable sales to $1.4 billion.

The Costa Mesa mall has seen 18 new stores this year and about as many others remodel, helping push its 2012 sales projection to $1.5 billion. That’s up about 7% from a year ago.

No. 2 Fashion Island, which saw sales rise almost 11% to $576 million, nabbed its own raft of OC-exclusive retailers and other new tenants. That took place amid a $100 million center makeover that has seen landscaping improvements and now is wrapping up with the addition of about 20,000 square feet of space.

No. 3 Brea Mall, owned by Indianapolis-based Simon Property Group Inc., and No. 4 The Market Place in Tustin maintained their spots on this year’s list with sales gains of about 6% and 16%, respectively.

The District at Tustin Legacy rounded out the top five with a 13.2% increase in sales to $364.7 million.

Taxable sales for the top five centers totaled $3.3 billion, accounting for nearly half of the list’s total sales for the 12-month period.

The year’s biggest percentage gainer was No. 11 The Outlets at Orange, which saw sales jump 21% to about $185.2 million for the 12-month period, good for a move up three spots on the ranking.

Its sales gains—and similarly boosted sales at other centers—was driven by a swell of new tenants added during the past year, according to General Manager Kristin Elfring. New stores at The Outlets include Banana Republic and Nordstrom Rack.

The Outlets, part of Simon Property’s The Mills Group, made a switch late last year from The Block at Orange to its current name to place a greater emphasis on its roster of outlet and value-priced tenants in a bid to distinguish itself from other malls and attract more locals and tourists. That strategy is paying off, Elfring said.

“We’re the only outlet center in Orange County that gives all shoppers a local avenue to do their shopping,” she said. “They don’t have to drive a couple hours to L.A. or to the desert. It’s right here in Orange County.”

Property improvements done in conjunction with the name change and new tenants also have helped. The center added a new entrance off the Garden Grove (22) Freeway that feeds directly into the side of the mall anchored by Saks Fifth Avenue’s Off 5th outlet. There also have been upgrades to three of the four center restrooms, with a fourth in the works.

No. 13 Downtown Disney District also saw a notable surge in taxable sales, which rose more than 15% to $158.9 million, according to information provided by the city of Anaheim. The total reported by the city does not include Disney-owned stores at the center.

The Disneyland Resort—which includes Downtown Disney along with the Disneyland and Disney California Adventure theme parks and three hotels—saw a surge in visitors with the June 15 opening of Cars Land.

Downtown Disney also saw the reopening of La Brea Bakery Café and The Lego Imagination Center store earlier this year. La Brea Bakery added new patio seating and made improvements to seating in front of the restaurant. The Lego store added more Disney characters made of legos set throughout the store’s interior and exterior.

A few fared less well despite the uptick in business for many OC shopping centers.

This year’s list expanded by three, with the addition of No. 19 South Coast Collection in Costa Mesa, No. 24 Plaza de la Paz in Laguna Niguel and No. 28 Pavilions Place in Westminster.

South Coast Collection, known as SoCo, debuted with the highest ranking of any newcomers on the list after adding several new tenants during the past year.