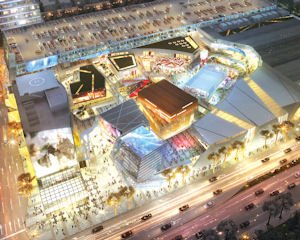 The Source: rendering of retail center in works at Beach Boulevard and Orangethorpe Avenue

Something big is coming to Buena Park.

Recently erected construction signs around the perimeter of an empty, 12-acre dirt lot tell the nearly 500,000 drivers who pass through the intersection of Beach Boulevard and Orangethorpe Avenue on average each day that a retail and entertainment center called The Source is in the works.

Oversized posters with renderings like images out of a slick lifestyle magazine surround the site, showing off visions of an urban shopping center with modern architecture.

It’s a clear contrast to the residential neighborhoods and low-rise strip centers that surround the planned project.

Lynwood-based developer M+D Properties broke ground this month on the project’s more than 480,000-square-foot, $100 million first phase, which is expected to bring national retailers to the area.

M+D also is billing the development as a center that will bring 5,000 jobs and boost the number of visitors to the area to nearly 11 million from 6.4 million.

The first phase of the project is slated for completion in fall 2014.

The rest of the project calls for nearly 200,000 square feet of office space and a four-star hotel, which the developer is considering building with the first phase, according to Katie Wanamaker, vice president of property management at Greenland Property Management LLC in Buena Park.

Greenland is the management arm of M+D, which is known for its Plaza Mexico shopping center in Lynwood. The 450,000-square-foot shopping center on the southern edge of Los Angeles County has been a hit since its 2001 opening.

The center is designed after an ancient pueblo in Mexico City, with anchors that include grocery store Food 4 Less and a Curacao department store. Future plans call for the addition of condominiums.

The two brothers behind Plaza Mexico—M+D owners Donald and Min Chae, neither of whom were available for comment—aim to score a similar hit with a different feel at The Source.

Wanamaker said a number of “major retailers” have signed letters of intent but would not disclose names.

The entrance to The Source will be fashioned after what Wanamaker called a “mini Times Square” with billboards and LED signs for advertising.

The Buena Park project is being financed by the developer’s investment and financing arm M+D Regional Center, which has EB-5 regional center designation by the U.S. government. The EB-5 program grants visas to individuals outside the U.S. that invest in projects deemed beneficial to an area’s economic development.

The city gave the project a boost when the city council approved a resolution two years ago promising to pay M+D the equivalent of 55% of the sales tax revenue the project generates for the next 30 years.

It also gave two lots, the former site of the Franklin Motel and a car wash, to the developer for free.

“It’s going to be a sea change for the community and put Buena Park on the map in terms of retail and entertainment,” Buena Park Community Development Director Joel Rosen said.

M+D believes the project will succeed because Buena Park is underserved by retailers, Wanamaker said. The closest mall, Los Cerritos Center in Cerritos, is about five miles away.

M+D hopes The Source will serve not only locals, but attract regional and international visitors by going relatively upscale.

“We’re looking to develop an iconic property for entertainment, shopping, food and wellness,” Wanamaker said. “We believe it will be the charge for North Orange County.”

It’s a big statement for what the city calls its Entertainment Zone, the name given to Buena Park’s main visitor area running along Beach Boulevard.

The city has long hoped to see the area revitalized.

Its now-dissolved redevelopment agency stepped in several years ago, pouring $40.6 million into the purchase of six motels along Beach Boulevard. Officials said the motels drew an inordinate number of complaints for prostitution and drugs.

“We’re still working very hard to bring in new attractions and hospitalities to Beach Boulevard,” Buena Park’s Rosen said. “We were thrown a bit of a monkey wrench with the dissolution of the redevelopment agency.”

Existing businesses in the area are hopeful about a new attraction for the area.

“Any project that will bring new visitors to Buena Park is always welcome,” Knott’s Berry General Manager Raffi Kaprelyan said. “Knott’s Berry Farm hosts thousands of local, out of state and international visitors every year. By bringing unique retail and dining options to Buena Park, you enhance a visitor’s experience and potentially lengthen their stay in the city—which benefits us all.”

Variety is what businesses hope The Source will add to Beach Boulevard.

The closing of Movieland Wax Museum didn’t affect Medieval Times, which was across the street, but it was one less option to help keep visitors in Buena Park longer, said Medieval Times Marketing and Sales Manager David Manuel.

“[Movieland] was a benefit for people to come to Buena Park and make more of a day of it,” Manuel said. In the past, you had a Movieland walk-through for a couple hours if you weren’t spending the entire day at Knott’s.”

Medieval Times, which has been in Buena Park since 1986, is itself a big draw for the area. About 100,000 guests are expected to have visited during this summer alone.

“[The Source is] a huge project,” Manuel said. “We’d much rather have a modern shopping, dining and entertainment venue located down the street from us rather than a large, dirt lot ... We’d love to see this street full and moving again.”