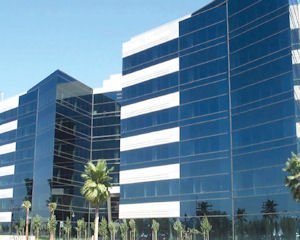 Newport Beach-based Irvine Company is making a big development and acquisition push into Silicon Valley, according to reports there.

The real estate owner and developer—and Orange County’s largest landlord—is moving ahead on a 41-acre office campus in Santa Clara, according to a recent report in the Silicon Valley/San Jose Business Journal.

The project could move ahead next year, and apparently will be built on a speculative basis. It’s slated to open as soon as early 2013, according to the report.

The midrise office project, dubbed the Santa Clara Gateway, will total about 450,000 square feet spread among three buildings. The offices will be the first in Santa Clara for Irvine Co., whose Northern California office portfolio largely runs in and around Sunnyvale and Milpitas.

Irvine Co. has reportedly owned the land for the project since 2000, and once envisioned building more than 900,000 square feet of offices there. The project’s plans have been postponed and scaled back over the years.

The Irvine Co.’s development plans would likely be the second-largest new office project to go up in the region. Palo Alto-based Menlo Equities LLC is said to have a 735,000-square-foot Santa Clara office campus in the works.

It bought the campus from Archon Group, an affiliate of Goldman Sachs Group Inc., according to the Silicon Valley/San Jose Business Journal. The complex is nearly full, with a roster of tenants that includes Dell Inc. and Juniper Networks Inc.

The Silicon Valley is the strongest office market in California, with vacancy levels of about 7% for the area’s best space, according to recent reports.

As in OC, Irvine Co. also has apartment development plans in the works for Silicon Valley.

It’s considering tearing down two older office buildings in North San Jose and building about 450 apartments, according to reports.

Irvine Co. already owns about 10 apartment complexes in Northern California, according to the company’s website.

A recently built apartment complex that targets older residents is trading hands, according to area brokers.

Jacaranda, a 131-unit active adult apartment community in the Sunny Hills area of Fullerton, is being sold to a unit of New York-based JP Morgan Chase & Co.

The price is about $32.2 million, or roughly $245,000 per unit, according to Ray Eldridge, senior vice president for the Newport Beach office of CBRE Group Inc., who was part of the team selling the complex.

Jacaranda was sold by Houston-based Morgan Group, which completed construction of the project last year.

The complex is restricted to residents 55 and older. As of June, Jacaranda was about 60% full, according to marketing materials.

Apartments at the complex—located on the south side of Rosecrans Avenue between Euclid Street and Parks Road—average about 1,000 square feet.

Anaheim’s Stadium Gateway should be going back on the sales block soon.

Los Angeles-based MPG Office Trust Inc. owns the other 20% stake in the office.

Charter Hall bought its interest in Stadium Gateway from fellow Australian investor Macquarie Office Trust, as part of a 13-building, 4.9-million-square-foot portfolio that traded hands for about $1.7 billion.

That deal valued Stadium Gateway at about $64.7 million, making the sale the priciest office deal in OC for the third quarter, according to data from Newport Beach-based brokerage Voit Real Estate Co.

Last week, MPG announced it had entered into an agreement regarding plans by Charter Hall to sell off portions of its recently acquired portfolio to affiliates of Boston-based Beacon Capital Partners LLC.

The agreement calls for MPG, Charter Hall and Beacon to put Stadium Gateway up for sale to third parties, starting in the next two weeks. A sale price for the Anaheim office, which is about 73% leased, has not been proposed.