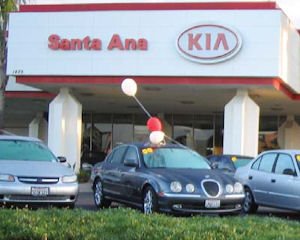 April was another good month in an ongoing recovery for Orange County auto dealers.

Sales last month at local dealers rose 13.5% from a year earlier to 10,198 autos, according to the Newport Beach-based Orange County Automobile Dealers Association.

The figure is based on registrations of new vehicles with the state, a barometer of sales.

Dealers now have had at least eight consecutive months of sales growth after bottoming out in 2010.

They still have a way to go: April’s auto sales were short of the nearly 15,000 monthly vehicles dealers here saw in 2006.

Luxury vehicle sales improved for all of the major brands, except Lexus, hurt in part by March’s earthquake and tsunami in Japan.

Toyota, impacted by the Japan’s recovery woes, was down nearly 11% to 1,840 autos sold in April.

That would mark the second year of double digit gains following the deep rut of 2009, when annual sales fell to less than 100,000, the lowest in more than 30 years, according to the dealers association.