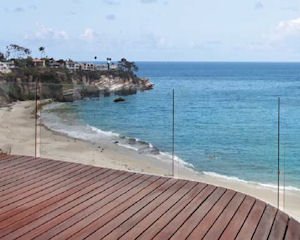 Agent John Stanaland recently sold a $6 million home in the Three Arch Bay neighborhood of Laguna Beach, known for movie stars, producers and other entertainment types who have lived there.

The home at 4 Mar Vista Lane was the seller’s second home. The seller now lives in a larger home in North Laguna.

“They wanted to be on the water,” he said.

The waterfront market is up so far this year, according to Stanaland.

“There’s a lot of distress in the market, but there’s also some very positive signs,” he said.

Stanaland had the listing for about nine months.

In the 1920s, movie producer and director Edward Griffith built a home in Three Arch Bay. Griffith lived there with his actress wife America Chedister until his death, according to Steve Turnbull, who runs a website called light-headed.com, which details the history of Three Arch Bay.

Sterling Holloway, actor and voice of Winnie the Pooh and the narrator for the TV show “Moonlighting,” lived at Three Arch Bay.

Turnbull describes Three Arch Bay like this: “We are a very close-knit community of many different types of people—businessmen, artists, doctors, musicians, lawyers, judges, movie stars, surfers, poets and priests—who all share a love of sun, sand, family and life.”

Three Arch Bay spans 120 acres. Most of its streets have Spanish names, including Mar Vista, which means ocean view.

Architect Brion Jeannette is known for designing one of the priciest homes in Orange County—the Portabello estate in Corona del Mar.

Luxury home brokerages are picking up listings and agents in the wake of John McMonigle’s personal filing for Chapter 7 bankruptcy protection in April.

White represented Bill Gross, cofounder of Newport Beach-based Pacific Investment Management Co., in his 2009 purchase of an 11,000-square-foot home on the bay of Newport Beach’s exclusive Harbor Island. Gross leveled the home and plans to rebuild there.

One of Stanaland’s recent sales was a former McMonigle listing at 29 Strand Beach Drive in Dana Point, which closed at $14.1 million.

Stanaland picked it up about three months ago. He said he was called and interviewed for the listing.

McMonigle had the listing for a couple of years.

McMonigle’s Newport Beach-based McMonigle Group Inc. has not filed bankruptcy. He cited “an ongoing stalemate with uncooperative lenders” as the reason for his personal filing.

McMonigle is trying to head off foreclosure on Villa del Lago, a 12.5-acre estate at 1 Pelican Hill Road North being built by him in Newport Coast. His funding for the project was cut off last year. The unfinished estate is listed at $37 million.

In March, half of Surterre’s closings were $4 million and up, according to the brokerage.

Iovenitti is charged with opening a Surterre office in Dana Point’s Monarch Beach in June as well as looking at possible expansion sites throughout the state and other cities across the U.S.