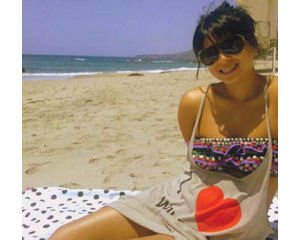 Nguyen: spent summers at the beach growing up

Vy Nguyen, the 29-year-old who started swimsuit designer Lolli Beach Candy out of her house in Brea, draws inspiration from her two favorite things: childhood and sweets.

“I like playful swimsuits,” Nguyen said. “Things with ruffles and other trim, bright colors, but with sexy cuts.”

Nguyen, whose background is in fashion, started designing swimsuits last year after being laid off as a buyer for a small Laguna Beach boutique.

Her obsession with swimsuits started early, she said. Growing up in Southern California, she spent summers in the pool or at the beach.

Nguyen’s suits are colorful—bright yellows, oranges and pinks—with trims such as ruffles and bows. They come in sexy, bold cuts, offsetting their cutesy look.

Women’s swimwear has held up during the tough retail market of the past few years. Sales are expected to hit $2.6 billion for the 12 months through March, up 1.8% from a year earlier, according to Port Washington, N.Y.-based NPD Group Inc., a consumer market research company.

Nguyen’s designs are targeted at 18- to 35-year-olds and also appeal to older women, she said.

“The one-pieces really appeal to moms and sometimes grandmas, too,” Nguyen said.

Lolli Beach is small and has gained mentions in Nylon and Seventeen magazines, which have helped spur sales.

Nguyen started off with about eight swimsuit styles in various colors and prints, mostly two pieces.

“I only had one one-piece my first year,” she said.

Nguyen’s since designed two one-pieces and about 10 bikinis. She’s also made a beach blanket.

Next year, Nguyen plans to add beach bags and cover-ups. She’s working on that line now.

The swimwear is sold throughout Southern California with a heavy presence in Orange County, at shops such as American Rag Cie in Los Angeles and Fashion Island, Harper’s in Corona del Mar and H. Lorenzo and G. Marie, both in Laguna Beach.

Harper’s has been carrying the line since its inception, store owner Erica Thomas said.

“We are a pop-up store for Lolli,” she said. “We carry every style of the line.”

The snow cone bow bottom—in every color—is doing well, Thomas said. Harper’s also is the only store to carry Lollibikinis, swimsuits for toddlers and girls, according to Thomas.

Women “love the big bows,” she said. The swimsuits are “super fun.”

Nguyen also sells her swimsuits through online retailers, such as swell.com, as well as on her own website, ilovelolli.com.

“Selling online is good for me,” Nguyen said. “I get a lot of press through it, and it’s easier for me to reach fans who are not in California.”

Lolli Beach suits sell for about $150.

It’s still too early to determine sales for the company. Nguyen said she’s doing well despite a tough economy.

Next up: the Miami Swim & Lingerie Show in July.

Nguyen, whose parents immigrated here from Vietnam, said she spent about $5,000 to start her business. She since has invested more, she said.

Nguyen handles everything for the company: sales, marketing, designs and so on. She eventually would like to branch out to include accessories, such as sunglasses, themed around the beach and her swimwear.

Nguyen said she’s at a breaking point now, struggling to have enough time to do everything.

She is looking for sales reps to help her swimsuits get into other markets. But they’re not always easy to find.

“I need someone to be motivated, to do it like I am,” she said.