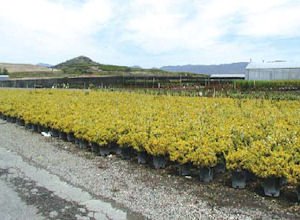 Rancho Mission Viejo LLC, the second-largest Orange County land owner, is planning to dip back into homebuilding after shelving development during the recession.

The land development and real estate company, owned by the Moiso and O’Neill families, has contacted more than 20 builders about starting up a 1,200-home project along Ortega Highway in eastern South County.

The project would include about 900 market-rate houses and 300 houses for seniors.

So far, three builders have been selected to work on the project, according to company officials: Irvine’s Standard Pacific Corp., Walnut’s Shea Homes and Bloomfield, Mich.-based Pulte Homes Inc.

A timeline for construction hasn’t been set and depends on market conditions and builder interest, according to Donald Vodra, chief operating officer for Rancho Mission Viejo.

In a best-case scenario, grading for the project could start this summer with possible construction starting in 2012.

A 2013 opening is possible for the first of the homes, according to Vodra.

Homebuilder interest has been strong for the project, with four to six builders vying for each land parcel, according to Vodra.

Sources not directly involved in the land deals expect additional builders to be brought on by the developer for the initial 1,200 homes or later phases of construction on company land.

The 1,200 homes are seen as the first stage of a proposed 14,000-home development that Rancho Mission Viejo’s been working on for the better part of a decade.

The project eventually could include about 5 million square feet of shops and offices and about 6,000 senior homes.

Prices for Rancho Mission Viejo’s land sales haven’t been disclosed. Smaller land parcels in South County have been trading for about $1.3 million per acre in deals closing this year.

Real estate sources not directly involved said that builders selected by Rancho Mission Viejo are expected to put 20% down. They also said that land prices are based on expectations that values will increase some 10% in the next year or so, when the lot sales actually will close.

The 1,200 homes being planned by the land owner aren’t too large, based on Rancho Mission Viejo’s record in South OC.

The company is behind the creation of the master-planned communities of Mission Viejo, Rancho Santa Margarita, Las Flores, and Ladera Ranch, which in total count tens of thousands of homes.

The latest plans would be the first home development project seen on Rancho Mission Viejo land since construction at Ladera Ranch wound down around the onset of the last housing downturn.

“We’d still be selling homes out there today,” if not for the mortgage and housing crash that started in 2007, Vodra said.

The development is the latest sign that Orange County’s largest land owners are seeing positive signs in the market.

Newport Beach-based Irvine Company, the largest land owner in the county, has opened two housing developments this year that eventually will have 2,600 homes for sale.

“We’ve been following them closely,” Vodra said of Irvine Co.

Rancho Mission Viejo’s homes could come to market around the same time that another major South County development, Great Parks Neighborhoods in Irvine, sees its first batch of homes built on land that once was part of the El Toro Marine Base.

Aliso Viejo’s FivePoint Communities LLC, the developer of the former base, is projecting that the land could see ground work begin next year, assuming market conditions continue to improve and entitlement and zoning work gets completed in time.

The developer tentatively expects Great Park homes to take shape at the start of 2013, Haddad said at the UCI conference.