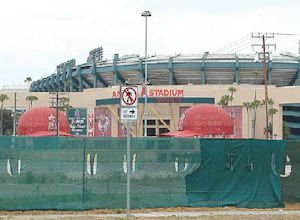 A Newport Beach-based developer snapped up an empty, bank-owned lot near Angel Stadium of Anaheim for a reported $8.5 million in one of the largest land sales the city’s Platinum Triangle has seen in several years.

The site is entitled for about 320 condominiums. It’s expected to be turned into apartments. Timing on construction hasn’t been disclosed. 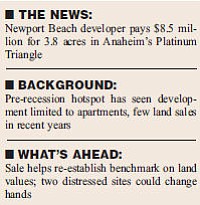 The property, next to the parking lot at Angel Stadium, sold for about $2.2 million per acre.

That’s down from $3 million-per-acre deals in the area that were being done at the height of the market around 2007.

It’s likely about double what the land was worth a year or two ago, according to local brokers.

West Millennium filed for bankruptcy in 2009.

Cathay had been marketing the site for close to two years, with an initial price closer to $11 million.

The deal is believed to be the first big bank-owned sale of land in the Platinum Triangle, an 840-acre swath of onetime industrial land around the baseball stadium.

The area mostly is in Anaheim and spills over into neighboring Orange.

Developers and city officials considered it a hotspot for high-rise condos, office complexes, shops and entertainment during the real estate boom.

The recession put most of those plans on hold.

About 2,000 apartments have been built in the Platinum Triangle in the past few years, accounting for most of the area’s development to date.

Many of the apartments were intended to be condos before the recession hit.

The market for condo projects remains lukewarm. But Orange County’s apartment market—including recently built complexes in the Platinum Triangle—has been strong of late.

That’s good for sellers and well below current capitalization rates for most office, industrial and retail properties besides a few higher-end properties that are well-leased.

Big-dollar deals in the Platinum Triangle that have closed in the past year include Newport Beach-based Irvine Company’s purchase of the Gateway complex in Orange, which sold for more than $200 million.

Denver-based UDR Inc. bought the nearby 1818 Platinum Triangle complex in Anaheim for $70 million.

The resurgent market could entice more apartment developers to break ground throughout the county.

“It seems like the strong market (for apartments) is going to continue for a while,” Giglio said.

Whether a development push might show staying power in the Platinum Triangle remains to be seen.

Officials for the developer, whose executives previously ran homebuilder Western Pacific Housing, could not be reached for comment.

Brokers with the Irvine office of Land Advisors Organization, a land brokerage that represented the buyer and seller in the deal, also declined to comment on specifics of the sale.

Among local projects, Integral has worked to entitle a site along MacArthur Boulevard in Santa Ana, where Newport Beach-based Lyon Apartments is planning a 300-unit complex.

Integral paid a reported $28.1 million for a 577-acre project in the Sacramento area earlier this year. More than 3,400 homes have been proposed for the site.

The Orangewood deal could help set the bar on future land sales in the Platinum Triangle, according to brokers with Land Advisors. A lack of sales in recent years made it difficult to figure land values.

At least two additional sites zoned for housing in the Platinum Triangle are said to be in some stage of going back to lenders and could come on the market later this year.

The recently sold Orangewood site is next to one of two large land parcels owned by Miami-based Lennar Corp., which has major operations in Aliso Viejo and has the largest plans of any developer for the Platinum Triangle.

Lennar’s been quiet on when it hopes to resume development or if the project will be scaled down or sold. The project is not believed to be financially distressed.