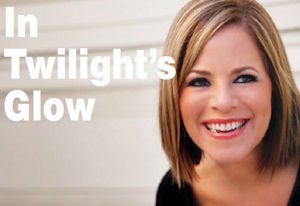 Noël: “It’s just amazing to watch the growth of this market”

Noël, a contemporary and young adult author, recently struck a deal with Summit Entertain-ment—the studio behind the “Twilight” mo-vies—to turn her “The Immortals” and “Riley Bloom” books into TV series or movies.

The six-book “The Immortals” series follows a young woman who escapes death and returns with the power to read people’s thoughts when she touches them.

“Riley Bloom” features a secondary character from the “Immortal” novels.

Summit Entertainment paid six figures for an 18 month option on both series’.

“Harry Potter,” “Twilight” and now “Hunger Games” all have fueled interest in the young adult and children’s market, according to Deahl.

Noël’s also sold rights to a contemporary novel, “Fly Me to the Moon,” to director Ridley Scott’s production company.

Part of the lure for Hollywood and publishers: paranormal or fantasy books appeal to a broad audience.

“About 40% of my readers are adults,” Noël said. “I love that these boundaries don’t exist anymore, and that the books are just engaging for people who want to read them.”

The young adult market is one publishing area where there’s still a lot of money being spent, Deahl said.

“There’s a lot of high-figure acquisitions being done,” she said. “That speaks to the intense popularity of the market.”

For Noël, film or TV rights also means better publishing deals. She recently struck a $3 million deal before bonuses with St. Martin Press for a new series, “Soul Seekers,” due in 2012.

An Orange County native, Noël grew up in Yorba Linda with little money. She dabbled in college but left to start work.

She’s held a number of jobs, including flight attendant.

She became inspired to write “The Immortals” series after losing three loved ones in five months. Shortly after, her husband found out he had leukemia. He’s now in remission.

Five years ago, she quit and started writing full time.

“I just couldn’t live in the world the same way anymore,” Noël said. “I was sort of on a quest to find comfort and answers, and I started reading metaphysical and afterlife books. That’s how I got the idea for the ‘The Immortals.’”

There was a lot of early rejection, she said.

“I got rejected by just about everybody,” Noël said. “As much as it hurt, it forced me to figure out why. They were all saying the same thing: You have a great voice, but the plot needs work.”

So Noël went back to the drawing board. She attended writing classes. She took the advice of one agent and read a book on plots, “Story,” by Robert McKee.

By page 25 she said she knew what she was doing wrong.

“I was ruthless with my manuscript,” Noël said of the editing process.

She’s been with her publishing company—St. Martin’s Press, part of Britain’s Macmillan Publishers Ltd.—since the beginning.

Her first seven books were contemporary stories. She kept coming back to the young adult genre, somehow always finding a teen protagonist in her stories. Her first agent who sat her down and said she had the makings of a young adult novelist.

Writing about teens is close to her heart, Noël said.

She grew up poor with divorced parents, the youngest of three girls.

Noël said she is driven by her upbringing.

“Because of my background, I don’t know if you ever reach any amount of money where you feel secure,” she said.

It was right before “Evermore,” her first book in the “Immortals” series, was published in the U.S. that she noticed things taking off. The book already was big in Germany and was being bid on by several publishers there and in other countries. Then the New York Times and Publishers Weekly noticed.

“That was the moment that I went, ‘Huh, maybe I can make a living off of this,’” Noël said.

It took 15 years to write her first book, Noël said. Now it takes three to six months to write a book, she said.

Noël works every day, weekends and holidays, too, she said.

Her literary agent serves as her film agent. She has one assistant. Her husband acts as her lawyer and manager, though she used an entertainment lawyer for the Hollywood deals. She also has a foreign rights agent.

“The Immortals” books have been translated into more than 37 languages and have been sold in 50 countries.