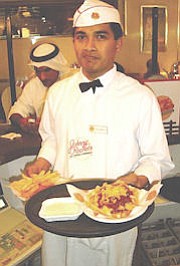 Server at Johnny Rockets in Kuwait: global openings could account for 70% of new diners in coming years

Aliso Viejo-based Johnny Rockets Group Inc. is banking on a love of American food around the globe for growth.

The company, which runs and franchises 1950s-style diners, is eyeing other countries to help it nearly double in size in the long term, Chief Executive John Fuller said.

Johnny Rockets, which serves burgers, fries and milkshakes, did about $300 million in sales last year from nearly 300 restaurants, most of them franchises.

Last month, Johnny Rockets opened a restaurant in Sinaloa, Mexico, via a franchisee. It’s the chain’s 13th in Mexico.

In March, the South Korean franchisee opened a second diner there.

“Our brand does better overseas than it does in the states, on average,” Fuller said. “There are people who accept Western culture, and our brand’s a natural fit for that. What we sell is Americana.”

A typical Johnny Rockets abroad does $1.6 million a year in sales, versus an average of $1.1 million for U.S. diners.

More global restaurants are in the works.

Eventually, global openings are expected to make up 70% of new diners.

Johnny Rockets has a deal with a franchisee in Russia that’s close to being finalized. That could bring 40 diners to Russia.

The company also is in talks in China, Singapore and Indonesia and will be meeting with a franchisee from Brazil in June, Fuller said.

Australia also is of interest, he said.

Franchisees are key to opening restaurants in other counties, according to Fuller said.

“You want to be understanding of the culture and what the eating habits are,” he said.

In South Korea, the typical hamburger is about 30% smaller than a usual Johnny Rockets burger. In the Philippines, some type of pasta is standard on every restaurant’s menu.

“You have to be cognizant of all that,” Fuller said. “The best part is the operators are going to tell you that. They’re the ones who educate us.”

Expansion overseas is made easier by the fact that people want American food and the old-time diner atmosphere of Johnny Rockets, Fuller said.

A couple hundred more restaurants in the next couple of years is the goal, according to Fuller.

During that time, he said, growth should be split between U.S. and global restaurant openings.

The development agreement there gives the franchisee the right to build two more restaurants in the next several years.

The sports lounge idea has worked in two New York locations, Fuller said. Another is set to open in Cincinnati by mid-August.

“Some of the locations that operators wanted to go in had a lot of extra space,” Fuller said. “They wanted to get creative so they added a full bar and appetizers. It’s more on a one-off basis than a strategic rollout.”

Johnny Rockets now runs 27 diners itself with the rest franchised.

The first company restaurant to open in four years is set to begin operating this summer at Monterey’s Cannery Row.

RedZone bought Johnny Rockets in 2007, a time when “everyone started going negative in the restaurant business,” Fuller said.

Economic circumstances made it difficult to justify growing the roster of company-owned diners at the time, he said.

“The company is performing really well right now and the opportunities to grow domestically and internationally have never been greater,” Fuller said. “So we’re going to try to take advantage of that.”