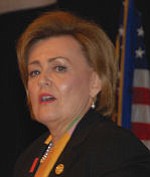 Taylor: “I still see myself as a teacher.”

Vanguard University’s turnaround tale isn’t for the faint of heart.

The private, Christian university in Costa Mesa, which offers degrees in liberal arts and professional studies, was drowning in debt and facing the loss of its accreditation when Carol Taylor was appointed acting president in January 2009.

Over the next year, Taylor helped lead a turnaround at the school in what she called a “season of very intense work.”

Taylor was one of five local businesswomen honored at the Business Journal’s 17th annual Women in Business awards luncheon May 25 at Hyatt Regency in Irvine.

The challenges Vanguard faced when Taylor was made acting president weren’t ideal or expected when she joined the school in 2007 as vice president of academic affairs.

“You always have an option at that point,” she said. “You can say this isn’t what I signed up for—there’s the exit and I’m out of here. Or you can say perhaps this is why I came here.”

Over the next year, Taylor reduced Vanguard’s operating budget by $3.5 million, helped cut debt by $1.5 million through gifts and established a new Board of Trustees among other measures to turn the school around.

The Western Association of Colleges and Schools removed Vanguard from probation in June 2009, citing “phenomenal progress.”

Last October, Taylor was inaugurated as the school’s ninth president after deferring the ceremony for a year to stay focused on the turnaround.

“The truth is, I did not save Vanguard,” she said. “That’s not a surprise to anyone who has helped turn an institution around. It was an amazing thing to watch this community of those who were committed to the success of Vanguard.”

Taylor’s career has spanned 38 years in the education industry.

She started off as a fifth grade teacher at a Greek Orthodox elementary school in Chicago.

“The teachers would joke with me about being the token non-Greek, unorthodox teacher,” Taylor said.

She earned a Master of Arts in cross-cultural communication from Assemblies of God Theological Seminary in Springfield, Mo., where she became interested in teaching at the university level.

Taylor worked at the University of Nebraska, Omaha, as an English as a Second Language instructor for international students.

Taylor earned her doctorate in multilingual/multicultural education in 1987 from Florida State University in Tallahassee. She then took a job at Princeton, N.J.-based Educational Testing Service, the nonprofit in charge of developing, administering and scoring various standardized tests throughout the world.

“I initially went to ETS thinking I would go for three or four years and it would be an incredible learning opportunity and then I’d come back to the university,” Taylor said. “My three to four years became 12 years.”

Taylor was in the midst of wrapping up a big project at ETS and was “beginning to feel a bit restless” when she stumbled upon a vice provost for undergraduate education position at Biola University in La Mirada and applied for the job. She didn’t know anyone from the school and had never lived in California.

She got the job in 2000 and stayed at Biola for seven years.

Each position, she said, “is just a different seat on the bus, but the reality is in my heart I still see myself as a teacher.”