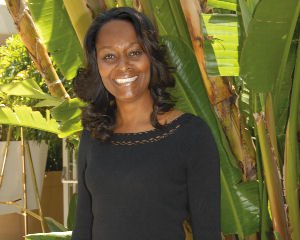 Jackson: wears “a number of hats” for Squar Milner

For Jackson, who serves as Squar Milner’s chief financial and administrative officer, blending different operations and corporate cultures is just one part of the job.

“I wear a number of hats,” she said. “I might be managing and overseeing finance and renewing leases one minute, and then later I may be overseeing a major remodel or executing a merger.”

Jackson was one of five women honored at the Business Journal’s 17th annual Women in Business award luncheon May 25 at the Hyatt Regency Irvine.

“Every day I ask the lord to plant my feet solid on the ground and give me the ability to walk in my purpose,” Jackson said.

She thanked a number of colleagues in the crowd and credited her mother, Deborah Willard Cunningham, and her late grandmother for inspiration.

Jackson’s list of responsibilities include financial management and reporting, accounting, human resources and information technology operations at the largest accounting firm with its headquarters here.

Jackson counts her work on the last three acquisitions by Squar Milner as accomplishments of particular pride.

The firm has been on a tear in recent years.

It now has four offices outside Orange County, with two in Los Angeles and others in San Diego and the Cayman Islands.

Jackson assisted with bringing San Diego accounting firm Peterson & Co. into Squar Milner’s fold after a buy in 2006. Jackson had about 90 days to complete the integration of Peterson, which had $5 million in yearly revenue at the time.

“The greatest challenge is the expectations and timetable in which I’m expected to get organizations completely merged,” she said.

Jackson joined Squar Milner in 2000 after spending six years in construction and interior design as a controller and vice president of finance. Her 20-year career has spanned industries from real estate to manufacturing.

“I’ve never really looked at the next opportunity based on industry,” Jackson said. “I look at it more from the standpoint of what I can bring to the organization. An effective CFO really does not have to be industry specific.”

A “phenomenal team” and “a great deal of personal support” help balance the pressures of her career with her life outside work.

Jackson has three sons ranging in ages from 11 to 20.

When she’s not watching her sons play sports, she often listens to music or takes dance lessons, learning anything from the waltz to the tango.

As a student working toward her bachelor’s in sociology from the University of California, Los Angeles, Jackson held two accounting jobs.

She later earned her master’s in business administration from the UCLA Anderson School of Management’s executive program.

These days she finds time to serve as a mentor on the job and outside work.

About a year ago, she established an informal leadership training program at Squar Milner, holding meetings at least once a month for employees.

Jackson also has been involved for the past three years with Irvine-based Human Options Inc., which provides support to victims of domestic violence and their families. She joined the board about a year ago.

Her involvement with Human Options is personal.

As a college student, Jackson was the victim of abuse by a former boyfriend. She ended the relationship after two years.

Jackson also has been involved with the local chapter of Girls Inc. in Costa Mesa for four years. The nonprofit, where Jackson is serving her second year on the board, provides mentoring to girls.

“I love to volunteer and be part of organizations that can make a difference,” she said.