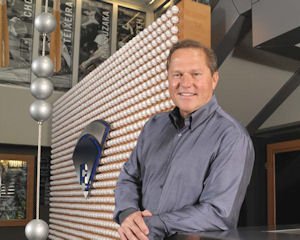 Boras: “When revenues go up, the value of the greatest performances go up”

Scott Boras has built a baseball dynasty in Newport Beach.

The game’s most powerful agent, Boras represents some of baseball’s biggest names with a string of record breaking contracts under his belt.

His business goes beyond deals: Boras also runs other companies that seek to enhance the careers of his athlete clients and help them manage their money.

Lawyers, psychologists, accountants and statisticians all are on the payroll at Boras Corp. Players have access to their services for free. It’s one of the perks of playing on Team Boras.

“The reason we give them all that is so they can execute their contracts and grow their careers,” Boras said.

Endorsements and charitable and public relations opportunities for players are handled by Boras Marketing.

Boras casts a long shadow in baseball, having turned players into multimillionaires and proven himself a worthy counterpoint to the game’s well-heeled owners.

For such a high-profile personality, he runs a relatively quiet operation in Newport Center. The headquarters is part tech-savvy office, part ultimate man cave.

The building often serves as a luxury rest stop for Boras’ weary road travelers—clients and employees alike. Some nights it doubles as an entertainment complex for clients on off days, with a digital scoreboard in the conference room and 70 flat screens that show baseball games and display player profiles.

A chef is on call to cook up meals.


Other times, deals get done at the building.

Boras is a lawyer by trade who played five years of minor league baseball for the St. Louis Cardinals and Chicago Cubs. Knee problems ended his playing career.

He’s as meticulous as they come.

More than $6 million has been spent on a database that tracks every pitch, gate receipt, broadcast deal and even estimates beer sales.

The collection provides Boras endless streams of usable data at a moment’s notice—on and off the field.

A computer room in a furnished basement is considered “his baby,” according to employees.

Boras can rattle off baseball revenue figures for the past 20 years and pinpoint the economics of the game at the time of each of his blockbuster deals.

“We really know what the revenues of the teams are, and we go out of the way to do that,” Boras said. “We have a research team that deals with every aspect of baseball.”

If revenue goes up or down, then a player’s value should reflect that, according to Boras.

That’s hard to swallow for some.

Take fans of the financially struggling New York Mets, who have watched Boras client Carlos Beltran soak up a $119 million, seven-year deal that ends this year.

In a recent profile by Jeffrey Toobin in The New Yorker, Mets owner Fred Wilpon called himself a “schmuck” for signing the outfielder “based on that one series” in the 2004 postseason when Beltran blasted eight home runs with the Houston Astros.

In all, Boras represents about 150 clients, many of them the game’s biggest stars and highest paid players, including Milwaukee Brewer Prince Fielder, St. Louis Cardinal Matt Holliday and New York Yankee Robinson Cano.

He inked the 2008 deal for New York Yankee Alex Rodriguez—potentially worth $300 million over 10 years. The contract is baseball’s biggest for now and topped previous record setting deals by Boras.

But Boras soon could see his contract record broken.

The market stands to dictate what kind of deal Pujols may get, according to Boras.

Boras said his image has been distorted. The assumption that he’s adversarial is more media folklore than reality, he said.

“I don’t view negotiating that way,” Boras said. “We represent some of the best players in the game. When revenues go up, the value of the greatest performances go up. So consequently we’re seeking contracts that have never been sought before, and that makes it appear to the average fan that it’s nonsensical.”

Even so, he said he understands how fans feel.

“I was raised on a farm, and we didn’t have much,” said Boras, who grew up in the Sacramento area. “Believe me, I clearly understand. But do we want the money going to a multimillion player or to a billionaire owner?”

When baseball revenue grows, Boras said he wants players to get half of that added money—a major point of contention in the ongoing National Football League lockout.

About 75% of baseball’s payroll goes to roughly 20% of the game’s biggest stars, according to Boras.

Boras said he has no interest in jumping the fence and owning part of a baseball team, like former agent Jeff Moorad of Newport Beach. Moorad led a group of investors to buy the San Diego Padres in 2009.

“I don’t ever fault anyone for doing that, but I’m never selling my clients,” Boras said.

A big baseball fan, Boras said he’s grateful for the chance to play a big role in the sport.

“This game has given me everything I have in my life,” he said.

Arte and the Angels

Los Angeles Angels of Anaheim owner Arte Moreno is one of the best in baseball, according to Scott Boras.

Moreno should be lauded for his contributions to baseball and the sport’s popularity here, he said.

“He’s done a good job of growing this franchise—it’s never been more popular,” Boras said. “They’re making $300 million a year. They’re in position to get a new TV contract where they possibly could make $500 million a year.”

Moreno has been less gracious.

When asked about dealing with Boras, he once told a reporter, “My mother told me when you have nothing nice to say about a person, you shouldn’t say anything at all.”

Boras is thought to have angered Moreno during negotiations over Mark Teixeira, who played for the Angels in 2008 before Boras landed him an eight-year, $180 million deal with the New York Yankees.

Boras leases a premier luxury suite behind home plate at Angel Stadium of Anaheim, where he often can be seen during televised games.

He said he doesn’t agree with all of Moreno’s player moves.

“Obviously in areas of free agent acquisitions, I think we can help him a lot,” Boras said.

Broadcasting rights played a big role in baseball’s recent takeover of the Los Angeles Dodgers, according to Scott Boras.

Owners Frank and Jamie McCourt, who struggled to fund the team’s payroll last month amid a bitter divorce, contend the team has a $3 billion, 20-year deal in waiting from Fox Sports Net.

The deal would be a lifesaver for the McCourts but bad for baseball, Boras said.

“Major League Baseball feels the rights of the Dodgers—and I agree with them—may be worth as much as $4.5 billion to $5 billion,” he said.

The McCourts are giving up “a huge premium” and Fox knows that, Boras said.

Industry watchers are keeping an eye on the Dodgers deal as a slew of big market teams will see their broadcasting pacts expire in the next four years.

They include the Los Angeles Angels of Anaheim, Philadelphia Phillies, the Chicago Cubs and White Sox and potentially the New York Mets.

“They don’t want the L.A. mark for those rights to be artificially depressed by one individual owner,” Boras said. “The owners are trying to protect the interest of all 30 teams. If I were them, I’d be doing the same thing.”

Baseball owners likely will bring in a new Dodgers owner who doesn’t need the cash infusion and will negotiate a better broadcast deal, according to Boras. 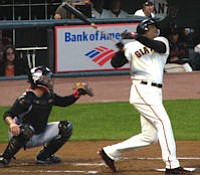 Bonds: should be in Hall of Fame, Boras says

Scott Boras calls the past decade baseball’s steroid era. But that shouldn’t keep home run king Barry Bonds out of the Hall of Fame, he said.

“I can’t blame the steroid era on the player alone,” Boras said. “I have to blame it on the owners, the commissioner’s office, the union, myself. All of us should have done a better job of education.”

Boundaries should have been set and a governing body formed to monitor performance enhancing drugs, according to Boras.

“None of those things were in place,” he said. “We gave them no authority to follow. And for us to say they were cheaters when there were no rules in place, I have a problem with that. If players knew that using steroids was illegal, it was going to damage their performance, it was going to create an integrity issue, I think the majority of them would not have participated.”