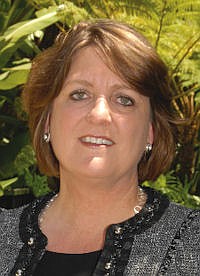 Hudash: learned from board, other business leaders.

Everyone told Laura Baden she had to meet Julie Hudash.

Baden, a volunteer and philanthropist with a lot already on her plate, was reluctant.

Once she met Hudash, she was all in.

“She’s passionate,” Baden said. “For her, it’s all about the kids.”

Hudash exudes her passion in a way that draws people to her cause.

She was one of five honorees at the Business Journal’s 17th Annual Women in Business awards May 25 at the Hyatt Regency Irvine.

Baden and her husband, Colin Baden—chief executive of Foothill Ranch-based Oakley Inc.—volunteer for Team Kids and are the group’s largest donors. They host one of its yearly fundraisers at Oakley.

“I really learned how to be a businesswoman from Laura Baden,” Hudash said.

Hudash founded Team Kids in 2001 in response to an article she read about an Irvine boy suffering from a rare heart defect.

They sold popsicles and held a pancake breakfast.

“Kids were trying to save this little boy’s life,” she said.

The effort confirmed Hudash’s long-held belief: “Our young people are our most untapped resource in this world.”

“They want to change the world—they want to solve problems,” she said. “Nothing is impossible to an eight year old.”

About 1,200 kids with 225 stands raised $11,000 for Hurricane Katrina survivors. Most recently LemonAID raised about $41,000 in 20 days to help survivors in the aftermath of Japan’s earthquake and tsunami.

“But raising money is not our mission at all—it’s just a by-product,” Hudash said. “Our mission is raising responsible children ready for the 21st century.”

Team Kids Challenge, the nonprofit’s flagship program, is a month-long series of volunteer projects that range from helping the homeless to protecting the environment.

The kids fulfill a “challenge” each week, such as collecting books to donate. In the last week, the kids create and put on a carnival at their school.

Team Kids has a staff of seven and many volunteers, some of whom once took part in the Team Kids programs.

Kim McFarland first got involved with Team Kids when she was in the third grade. She’s now studying sociology at California State University, San Diego and volunteering as a Team Kids intern this summer.

“It’s awesome to be able to come back and help out,” McFarland said.

Team Kids holds three fundraisers a year, which account for about half of its $400,000 budget. Its biggest event is held at Il Fornaio in Irvine.

For the past six years, Il Fornaio managing partner Marcello Apollonio has donated the restaurant, food and staff. The contribution is worth about $18,000, Hudash said.

Hudash said much of what she knows about business she learned from her board and other business leaders.

For Hudash, her husband Ray and her five kids, Team Kids also has been a family project.

“This organization has been a hands-on thing for our whole family,” she said. “As far as balance, I don’t even know what that means.”