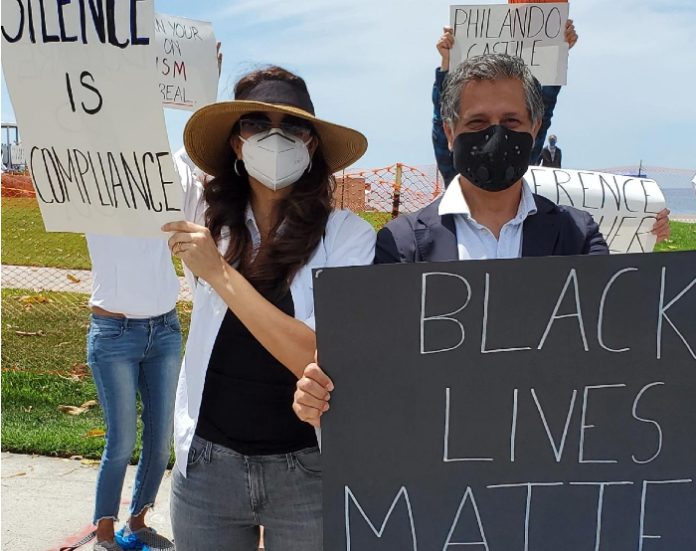 The first time Joe Kiani joined an organized protest was in college.

The second time was May 31, when the 55-year-old Chairman and Chief Executive of Masimo Corp., OC’s fifth-largest public company, joined his wife Sarah, and some 60 or so others, to protest the killing of George Floyd and the state of race relations in the country.

The demonstration, held at Main Beach Park in Laguna Beach, was peaceful and drew a mostly sympathetic response from cars driving along Coast Highway. Many honked, some flashed peace signs and gave the group a thumbs up.

A few middle fingers were seen, too, noted Kiani, who wore a dark blazer, matching black face mask and carried a “Black Lives Matter” sign at the event.

Scattered opposition aside, Kiani’s reasons for attending were largely about unity, and bringing the community together, he said.

“We have to look after each other, not just yourself,” Kiani said. “If we don’t do that … one day the hangman will come for you.

It’s a message he’s hoping other area execs and business leaders are hearing.

In terms of what others in the business community can do, “anything that they are comfortable with that shows they care” is a start, Kiani said of ways the corporate world can combat racism.

He believes that his company’s employees—some of whom attended the Laguna Beach event—have a “sense of pride that Masimo didn’t sit on the sidelines.”

Employees at the $12 billion-valued company—one that’s seen a stunning 43% boost in market value this year, amid growing sales of its remote monitoring devices during the pandemic—have been “scared, and worried” about what they’ve seen across the country the past few weeks, he said.

The violence that has rocked Los Angeles and other cities amid the demonstrations and police response to the protests had largely spared OC as of late last week.

Still, the uncertain mood added another element of trouble to the area’s business community, in particular a hard-hit retail sector that’s largely been at a standstill the past few months.

South Coast Plaza opted to hold off its long-awaited reopening on June 1. Irvine Co. closed many of its malls early during the week, and Corona del Mar businesses along Coast Highway boarded up their storefronts (many with pro-demonstrator BLM slogans) to prevent any possible damage, among actions from across the county.

From a corporate perspective, Kiani said his firm combats racism by embracing diversity in its workforce.

“We have more Vikrams and Mohameds than Joes,” he quipped. Kiani was born in Iran and moved to the U.S. when he was 9.

Masimo, which began in 1989, is a combination of his given name Massi along with co-founder Mohamed Diab, who is a senior research scientist at the company.

From a political standpoint, Kiani, a prominent supporter of Joe Biden’s presidential campaign, urges other area execs and others to look local, not just national, in terms of reform.

He suggests contacting state senators and assembly members to seek changes in the law, in particular those involving police violence.

Police “should be treated the same way as I would” when a crime is committed, he said.

Kiani notes he has more Republican friends than Democratic ones in the local business community, and said he’s not anti-police. Among future protests he and his family plans to attend, he’d like to do one held in conjunction with local sheriffs, and OC police.

“We’re all in this together.”