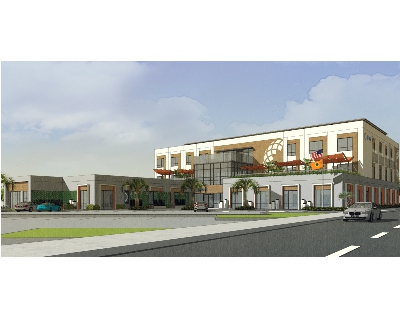 A large cross section of Orange County healthcare and civic leaders expect a forthcoming $40 million facility in the city of Orange to mark the first step in a unified approach by the county toward combatting mental health problems and treating drug abuse—and in doing so alleviating some of the area’s homelessness issues.

Be Well Orange County, a recently created collection of businesspeople, politicians and others, this month held a groundbreaking event for a new mental health treatment campus, the first of its type in the area.

The site is now beginning an extensive renovation that’s scheduled to be completed in about a year.

Backers of the project expect the center to get nearly 10,000 visits a year.

The services provided “will be a significant step forward in helping to break the cycle of mental illness, drug addiction, and displacement that many homeless citizens suffer,” said Orange Mayor Mark Murphy.

The site is near the intersection of the Santa Ana (5) and Orange (57) freeways, not far from where Anaheim’s prominent homeless encampments were previously situated last year.

The estimated $40 million cost of the initial project is largely being funded by three groups: CalOptima, the community-based Medi-Cal plan, the County of Orange, and a collection of area hospitals—Kaiser Permanente, Hoag and Providence St. Joseph Health.

Two more locations are planned by Be Well OC going forward, in South County and closer to the coast, according to Dan Young, a board member of the group. Specific locations haven’t been selected yet.

Young, a former mayor of Santa Ana, and more recently an executive at Irvine Co., likens Be Well’s approach with treating mental health and addiction to that of treating heart disease. Until now, “there was no [unified] system of care” with the former locally, he said.

“You can’t win the battle without setting up the system,” Young said. “It’s the same as heart surgery.”

The goal is for the Orange location to be a “specialized center” that offers treatment, giving people a place to go to for help besides a hospital or jail, he said.

Dr. Richard Afable, the former chief executive of St. Joseph Hoag Health, said in a statement at the time of this month’s groundbreaking that “the integration of mental health and substance abuse services in a central, easily accessible location, like the Be Well OC Campus, is critical.”

What’s more, “co-locating social support services with clinical care honors whole-person needs and a whole-systems approach, in order to meet the ultimate goal: improving the mental and emotional wellbeing of the Orange County community,” said Afable, who now serves as president and board chair of Mind OC, the 501(c) organization that serves Be Well.

“For too long, Orange County has lacked the resources to treat mental health problems, psychiatric emergencies and substance abuse disorders,” said Andrew Do, a member of the OC Board of Supervisors.

Do said improving the county’s mental healthcare services for its constituents has been one of his top priorities since taking office; the board earmarked $16.6 million for the creation of the campus.

“This facility will support all Orange County patients and families struggling with mental illness by getting them the care they need,” Do said.

Supervisor Do also said at the groundbreaking that the facility is a key component in the county’s plan to combat homelessness.

Young, a member of the Business Journal’s OC 50 list of top area executives during his time at Irvine Co., said Be Well tapped him because “they needed a real estate guy.” He worked with local and state representatives to get the Orange project moving ahead.

“This is one of the best things I’ve worked on in my career,” said Young, who said other insurers besides CalOptima are likely to be involved in the next two Be Well locations in the county.