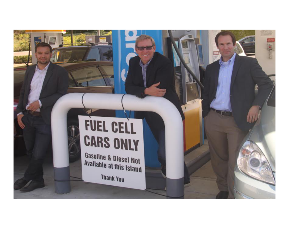 The funds will supplement the $27.6 million in grant money the Newport Beach-based company received earlier this year from the California Energy Commission to construct 19 hydrogen fueling stations. They will be dispersed along major traffic corridors and regional centers—two in Los Angeles and one each in Costa Mesa, Laguna Niguel, San Diego and other cities—and are scheduled to open next fall.

Honda’s financial assistance will allow FirstElement to expand its network by more than 50% to at least 31 stations.

Earlier this month, Honda unveiled the Honda FCV Concept in Japan and said fuel-cell vehicles are scheduled to be launched in Japan in March 2016, followed by the U.S. and Europe.

FirstElement has also received a $7 million “arm’s length” loan from Toyota Motor Sales U.S.A. Inc. in Torrance to cover operation and maintenance expenses of the stations.