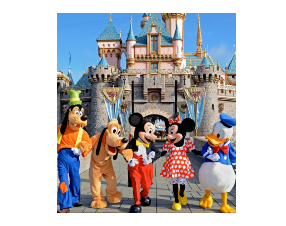 Walt Disney Co. is proposing a $1 billion expansion at its Disneyland theme park in Anaheim that would include new attractions, parking and other infrastructure improvements – and it wants a tax break in exchange.

The Burbank entertainment empire has a range of options for crowd pleasing new attractions now that it owns the “Star Wars,” Marvel and Pixar franchises and could also cash in further on its latest animated blockbuster, “Frozen.”

What Disney wants in return for the job-creating, tourism-boosting upgrade is an extension to an agreement by the city of Anaheim to not collect an admission tax for another 30 years. The current agreement expires in June 2016. No Disney park in the world currently has an admission tax.

The Anaheim City Council is scheduled to consider the tax exemption at its July 7 meeting.

A notice posted on the city website explained that Disney was evaluating new attractions to drive attendance and longer stays at the Anaheim resort. An expansion would occur within the existing footprint of the resort as Disney still has spare room inside its two Anaheim parks – but it is not yet known if the expansion would cover Disneyland, Disney California Adventure or both.

“A potential investment could be valued at $1 billion,” the notice said. “If Disney decides to move forward, it would have until Dec. 31, 2024, to complete its investment under the proposed agreement.”

Disney Chief Executive Bob Iger told shareholders earlier this year the company plans to expand the Disneyland Resort and that Disney Imagineers are working on “Star Wars” attractions for theme parks, according to the Orange County Register. That has led to speculation that a “Star Wars” land is on the horizon and also that Marvel characters will have a big part to play in Disney’s theme park future.

Disney did a $1 billion expansion of California Adventure in 2012 that resulted in the hiring of 5,000 new employees. The Disneyland resort is the largest employer in Orange County.